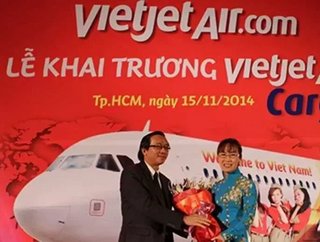 Follow @SamJermy and @SupplyChainD on Twitter.Vietjet has officially launched an affiliate company, Vietjet Cargo, paving the way for the dynamic new-ag...

With the establishment of Vietjet Cargo, Vietjet has formed a new and breakthrough business model in which air cargo is independently and strategically operated with the ambition to be the very first air cargo service in Vietnam and Southeast Asia.

Do Xuan Quang, CEO of Vietjet Cargo, introduced Vietjet Cargo’s products and services. He said: “Not only with the main function of air cargo in local and global commercial flights but Vietjet Cargo also features its own in freighter fleet and air charter services nationwide and all over the world.

“Vietjet Air Cargo will partner with Interlines to enhance and further develop the cargo network.”

In a time of growing demand in air transport and with the present economic integration, the company believes the establishment of Vietjet Cargo is a great opportunity but also a challenge for such a young and new age airline as Vietjet.

Local airports processed 770,000 tons of goods last year, a 67 percent jump from 2010, according to the Civil Aviation Authority of Vietnam. Air cargo traffic is expected to increase by as much as 23 percent this year, according to the transport ministry.

Demand for air cargo comes from companies such as Samsung, LG Electronics, and Apple supplier Wintek, whose electronics goods made in Vietnam require speedy delivery.

Nguyen Thi Phuong Thao, Vice Chairwoman of Vietjet said: “Vietjet as the main company also focuses on expanding its business network. In addition to its main function as a commercial airline, Vietjet has been linking potential partners in various areas such as aircraft maintenance, training and development, parts manufacturing, and aerospace with industrial parks in Vietnam. We are currently working towards the establishment of our subsidiaries in the aviation industry, and airline alliances in other countries.”

With a team of Vietjet professional companies and strategic business development plans, Vietjet Cargo is now set to win fruitful business to become the leading cargo airline in Vietnam and Southeast Asia.