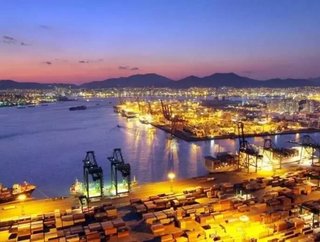 Follow @SamJermy and @SupplyChainD on Twitter.The volume of cargo processed at South Korea&#39;s seaports rose slightly from a year earlier in the first...

The volume of cargo processed at South Korea's seaports rose slightly from a year earlier in the first nine months of the year on an increase in import-export cargo, the government has said.

In the nine months that ended 30 September, South Korean seaports handled approximately 1.04 billion tonnes of cargo, up 2.7 percent from the same period in 2013 according to the Ministry of Oceans and Fisheries.

Import-export cargo gained 4 percent on-year during the nine months to some 868.38 million tonnes, according to the ministry.

South Korea's overall exports had risen 2.9 percent on-year to £264 billion in the cited period, with imports growing at a slightly faster rate of 3.6 percent to £246 billion, earlier figures from the Ministry of Trade, Industry and Energy showed.

Domestic cargo on the other hand, dropped 3.6 percent on-year to 168.27 million tonnes.

Seaport cargo in terms of containers grew 4.3 percent on-year to 18.18 million twenty-foot-equivalent-units (TEUs), again reflecting a rise in import-export cargo that makes up the largest portion of container cargo.

The ministry said import-export cargo, in terms of container cargo, gained 3 percent on-year to nearly 10.7 million TEUs in the January-September period with the amount of transshipment cargo climbing 6.5 percent to some 7.35 million TEUs. Transshipment cargo refers to those processed here while en route to other final destinations, often to change means of transportation.

By port, container cargo processed at the country's largest seaport in Busan rose 3.9 percent on-year to a little over 13.7 million TEUs in the first nine months, making Busan the world's sixth-largest seaport, the ministry said.