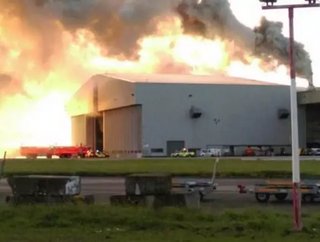 Follow @SamJermy and @SupplyChainD on Twitter. Flights from Dublin Airport were suspended this morning after a fire broke out in hangar 3, which cont...

Flights from Dublin Airport were suspended this morning after a fire broke out in hangar 3, which contained two aircraft at the time according to Sky News. Pictures from the scene shows flames engulfing the hangar at the airport and the fire brigade based at the airport as well as the Dublin Fire Brigade attended the scene.

The incident started at 6:15am this morning, and no injuries were reported after the fire had been brought under control.

Dublin Fire Brigade confirmed that four pumps attended the scene. According to the BBC, the Dublin Airport Authority said the fire was in a restricted area, separate from passengers.

Anyone planning to travel today have been urged to contact their airline for the latest information on departures. A number incoming flights have been diverted to other airports including nearby Shannon and Belfast.

An airport spokeswoman said: "We responded to this morning's hangar fire with 7 Dublin Airport fire tenders supported by 4 tenders from the Dublin Fire Brigade. All flight operations were suspended because all emergency services have been brought to fight the fire and as a result if something happens on the airfield the fire cover is not available. This is standard procedure.”

KLM Ireland and Aer Lingus were among some of the airlines advising passengers to get in contact in regards to re-booking assistance, but otherwise they are advising travellers who are flying today to still make their way to the airport as normal.

Dublin Airport officials also stated that its onsite fire crews responded to the incident in less than three minutes this morning on the airfield and that its crew train constantly to deal with these kind of emergencies.