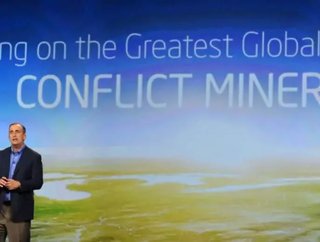 The announcement by of Intels Chief Executive Officer Brian Krzanich that his company will work to cut all conflict minerals from its product has been...

The announcement by of Intel’s Chief Executive Officer Brian Krzanich that his company will work to cut all conflict minerals from its product has been hailed as “an inspiration to the industry” by another top industry insider.

Mark Morley, Director of Industry Marketing for Manufacturing at American multinational b2b integration company GXS, praised Intel Corporation – the largest computer chip maker in the world – following the declaration by Krzanich during the pre-show keynote for the 2014 International Consumer Electronics Show in Las Vegas in January.

Conflict minerals can appear in the raw mineral supply chain. Minerals like gold and tungsten are used in electronics manufacturing are mined in the Democratic Republic of the Congo and neighbouring countries, with the trade often controlled by armed groups.

The drive to eradicate them was given a boost when Krzanich, in Las Vegas early January, said: “Two years ago, I told several colleagues that we needed a hard goal, a commitment to reasonably conclude that the metals used in our microprocessors are conflict-free.

"We felt an obligation to implement changes in our supply chain to ensure that our business and our products were not inadvertently funding human atrocities in the Democratic Republic of the Congo.

“Even though we have reached this milestone, it is just a start. We will continue our audits and resolve issues that are found."

He said  Intel had achieved a critical milestone and the minerals used in microprocessor silicon and packages manufactured in Intel's factories are "conflict-free" as concluded by third-party audits or direct validation by Intel's supply chain organization.

Mark Morley said: “Intel’s pledge to make chips free of conflict minerals, serves as an inspiration to the industry.

“In addition to the moral imperative, it will soon be a legal requirement in the United States when the Dodd-Frank Wall Street Reform and Consumer Protection Act comes into effect in May.

“The new law means that any company submitting filings to the Securities and Exchange Commission must confirm there are no conflict minerals in their supply chain.”

The DRC has been plagued for years by regional conflict and Intel's policy move is in response to increased international pressure for technology firms to investigate the sources of their raw minerals.

A source of funding violence for armed groups includes the trade of mineral products from the DRC. Some of these so-called ‘conflict minerals’ are in many kinds of products, including electronics.

Intel has implemented a process within its supply chain organization to validate that its sources – the smelters that provide tantalum, tin, tungsten and gold used in microprocessor silicon and packages manufactured in Intel factories – are not inadvertently funding this conflict in the DRC. Krzanich challenged the entire electronics industry to join Intel in its efforts.

Morley argues that a strong supply chain is essential for companies to rid their products of conflict minerals, saying that companies will need to have “have full visibility of their extended supply chain, and up-to-date contact information for every company they deal with across the globe to be sure that they have eradicated conflict minerals from their supply chains.”

He added: “An effective community management platform will be vital to ensure that companies can adhere to government legislation like the Dodd-Frank law”