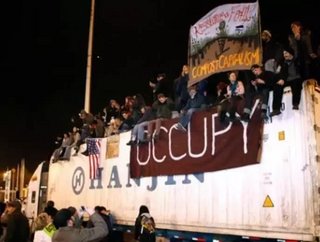 The Occupy Wall Street movement is starting to have a big impact on the supply chain industry. Weeks after 10,000 protesters shut down Oaklands busy po...

The Occupy Wall Street movement is starting to have a big impact on the supply chain industry.

Weeks after 10,000 protesters shut down Oakland’s busy port in early November, some shipping terminals were blocked by protesters at Portland, Ore., Longview, Wash. and again in Oakland, Calif.

“The truckers are still here, but there’s nobody here to unload their stuff,” protest organizer Boots Riley told The New York Daily News. “We shut down the Port of Oakland for the daytime shift and we’re coming back in the evening. Mission accomplished.”

OCCUPY PORT OF OAKLAND, ROUND TWO

While the immediate supply chain economic impact is not yet clear, Oakland’s seaport is one of the busiest in the eastern Pacific. The Port of Oakland is the fifth busiest container port in the U.S., trailing only Los Angeles, Newark, Savannah and Long Beach.

There is a bit of good news for supply chain managers up and down the West Coast. Occupy protesters attracted far fewer people than what the movement had hoped for, while their protesting tactics are reportedly losing popularity among working-class Americans.

“Support is one thing,” wrote Robert McEllrath, president of the International Longshore and Warehouse Union, in a letter obtained by the San Francisco Chronicle to local union chapters. “Organization from outside groups attempting to co-opt our struggle in order to advance a broader agenda is quite another and one that is destructive to our democratic process.”