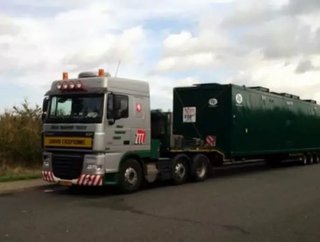 Cooperation and planning are vital in any transport, but when it comes to heavy and oversized transport, it counts for even more. The Van der Vlist group are heavy transport specialists, they now provide many other services in the industry, but road transport is where there history lies.

The importance of thorough planning and expertise were shown recently when Zwaar Transport Twente (ZTT), member of the Van der Vlist group, received an order to take a container from western Germany to a small village in North Lincolnshire, UK. The container, which held a Biomass generator, weighed 30 tonnes, was 3.05 metres wide, 3.2 metres high and 15 metres long. Based on these dimensions, ZTT initially thought that based on those dimensions, a standard semi low trailer would be fine, with no worries on the road infrastructure either on mainland Europe, or in the UK. However they were unsure of the terrain just before the delivery site, and asked senior operations coordinator from Van der Vlist’s UK office, Richard Marshall, to conduct a route survey to clarify the situation.

Richard found that on the main access point to the farm in Crowle, there was a low grade 2 listed bridge, which with a stated clearance height of 4.4 metres would cause a problem. Upon searching for alternative access he found that there was another access route, but that modifications would need to be made, and as it was only a track and weather conditions would have to be favourable or the weight could cause the truck to sink. Following the report, the Van der Vlist group knew they had to act quickly, as this second option would not be an option at all once the weather started to deteriorate, so they sent in John van der Vlist from the Van der Vlist Project management team to thoroughly evaluate the site and confirm whether access would be possible evaluating the merits of all possible ways to clear under the bridge.

The first step was to measure the bridge thoroughly at all points, although the stated height is 4.4 metres, due to the width of the container and arc of the bridge, the clearance height was short of 4 metres. From this it was decided that the container had to be brought in on the lowest trailer possible, a vessel bridge or ‘beam trailer’, reducing the overall height to 3.5 metres. However that was not the only issue, there was a sharp ‘S’ turn almost immediately after it, and due to the arch in the bridge, and the unstable ground underneath, it was still going to be a tricky operation.

After six hours of planning, measuring and re-measuring, they were finally satisfied that the passing was possible, and recommended a few things to make it safer and easier for everyone on site. With a private escort, a rear steering trailer and a second man to assist the driver, the task was given the go-ahead.

Now satisfied that the container could safely make it to the destination, ZTT sent a semi low loader to collect the load, and take it to Van der Vlist headquarters in Groot-Ammers. Here the container was transferred to the vessel bridge trailer, so it could sit as low as possible in preparation for the tricky final stint. It then began a journey to Rotterdam to be taken across to Immingham in the UK by ferry overnight.

Upon arrival it was met by the private escort, and commenced the 47 km journey to Northmoor farm. As the truck pulled off the main road, maintaining a low speed was important, as the low trailer height combined with an uneven surface created a testing situation. Upon reaching the bridge, the driver had to call upon all of his expertise, as well as the guidance of the second driver and escort driver, and began to reverse towards the bridge to give maximum control and maneuverability.

Judging the distance as it was moving, they decided that although it looked like it should clear it was still too close for comfort with the conditions on the day. The option they had was to lower the container yet further into the trailer, and use elephants feet to support it, whilst still coming out perfectly down the centre of the underpass in order to stay clear, and maintaining a very slow pace for control. With constant help from the second man and the escort driver, the container passed through nicely and was moved back up so that the trailer could again fully support it’s weight. However following the bridge the driver still had to negotiate an immediate sharp and narrow right bend, followed directly by a left turn which had to be navigated in reverse still to maximise control, and at a very slow speed under the watchful eyes of all present. After successfully navigating it the load then carried on carefully, to be finally unloaded on the farm site.

This transport was only made possible by thorough planning and expertise.