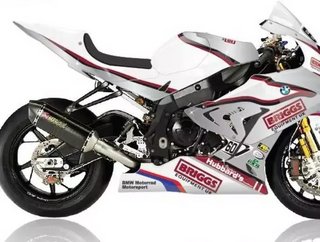 The RAF Reserves team return for their second season in the premier class, moving to BMW power for their 2015 campaign. The team has also retained the services of rider Peter Hickman, who returned to BSB towards the middle of last season. He set the fastest ever lap of the TT course and was soon pushing for top ten finishes before securing his and the team's first race win at Cadwell Park. Having ended 2014 just outside the top ten standings, Peter and the team are targeting a place in the end of season Showdown as their goal for 2015.

“Briggs Equipment has a long standing partnership with the Ministry of Defence and is thrilled to support the RAF Reserves Team. We are extremely excited to be involved, the move to BMW presents a real opportunity for Peter to expand on his success from last year. The new partnership will make for exciting racing and we wish him every success for the season.

The partnership was officially announced at the MCN London Motorcycle Show on February 15. As part of the sponsorship arrangement Briggs Equipment branding will be prominent on the race bikes along with the rider and team clothing. There will also be television coverage on Eurosport, ITV and ITV4 at some of the events.

RAF Reserves Team owner Lee Hardy comments: "2015 is certainly going to be a whole new challenge. The change of machinery has been one decision that has taken a lot of deliberating but one I feel will take the team forward and help deliver my three year plan. We are currently in the process of building a 2015 BMW S1000RR and I am working with new manufacturers to give Peter the best bike possible."

The opening round of the 2015 MCE Insurance British Superbike Championship is at Donington Park on April 4-6.