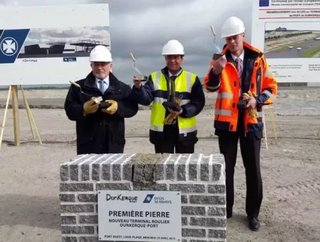 Follow @SamJermy and @SupplyChainD on Twitter.Wednesday 22 April saw the official launch of work on the new cross-Channel terminal, when a ceremony was...

Wednesday 22 April saw the official launch of work on the new cross-Channel terminal, when a ceremony was held to lay the first stone. The event took place in the presence of Dunkerque-Port’s CEO Stéphane Raison, Carsten Jensen, Senior Vice-President of DFDS Seaways and Henri Jean, Sub-Prefect of Dunkirk District, as well as the leading figures involved in the project.

The volumes of vehicles transiting through the port of Dunkirk on their way to Great Britain represent a substantial part of the total cross-Channel traffic. In view of this success, and to prepare for the future, Dunkerque-Port and DFDS Seaways signed a memorandum of understanding in November 2013 defining a redevelopment programme for the cross-Channel terminal.

As part of these redevelopment works, DFDS Seaways will construct a new passenger reception building (the first stone of which was laid yesterday) and control booths at the entrance to the site.

The port of Dunkirk will assist DFDS Seaways in these works, and will also create the necessary yards and buildings for the control of vehicles and passengers as well as the pre-boarding parking areas, which will be located close to the walkways to facilitate boarding operations. These works are 10 percent funded under the Trans-European Transport Networks (TEN-T) scheme.

The new developments will improve access to the terminal from the highways and motorways, and allow customers to move quickly and easily from the entrance to the boarding car parks.

They will also speed up border and security controls in compliance with European and international regulations, and improve the security arrangements of the site. Other objectives include shorter ship loading and discharge times, improved safety for the personnel in charge of these operations, and increased capacities of the pre-boarding car parks (provision for more than two ships fully loaded).

The project opens perspectives for development and even for hosting new shipping routes (areas available for extension). The total investment is €13.68 million.