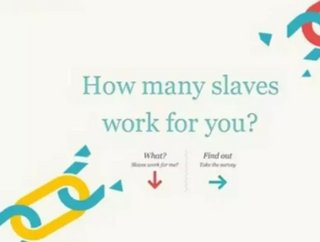 Follow @WDMEllaCopeland Does your business use slave labour? According to statistics released by surveys on the website &lsquo;Made in a free world, in...

Does your business use slave labour? According to statistics released by surveys on the website ‘Made in a free world’, individual consumers have an average of 34 slaves working for them, as a result of owning products and services which have been manufactured or distributed using slave labour.

This week, the White House announced a range of efforts to combat human trafficking, including the launch of Slavery Footprint’s Made In A Free World initiative, the first programme designed to help companies eradicate forced labour in their supply chains.

Developed by the non-profit organisation Slavery Footprint, this new programme is designed to identify high risk areas for forced labour within their supply chains and to provide the assistance of independent auditors to address those risks. Supported by the US State Department, NGOs, Dun and Bradstreet and Ariba, the Made in a Free World platform will provide public and industry recognition for tackling the issue of forced labour head-on.

The launch of the Made in a Free World platform was announced following Barack Obama’s speech at the Clinton Global Initiative on ending modern slavery.

Launched one year ago this week, the Slavery Footprint website has enabled over 825,000 consumers in 200 countries and territories to calculate the likely number of slaves involved in the creation of products they use on a daily basis.

The results of the completed surveys revealed that individuals have an average of 34 slaves working for them. Using the website’s online Action Center and associated FreeWorld mobile app, over 320,000 individual actions have been taken, including over 200,000 letters sent directly to companies asking them to provide products made without slave labor.

According to Justin Dillon, the founder and chief executive of Slavery Footprint, the Made in a Free World platform will give businesses the tools and support they need to meet the growing consumer demand for products created without forced labor

“The overwhelming response to Slavery Footprint proves that consumers care deeply about this issue and will support companies that do what is right not only for humankind, but for their business,” said Dillon. “We have a created a global movement that will now support and promote companies that use the Made in a Free World platform to eradicate forced labor from their supply chains."