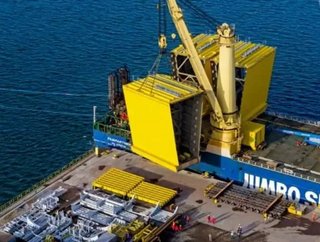 The worlds largest Goliath gantry crane arrived at its destination in Rio Grande do Sul in southern Brazil last week. With a lifting capacity of 2,000...

The world’s largest Goliath gantry crane arrived at its destination in Rio Grande do Sul in southern Brazil last week.

With a lifting capacity of 2,000 tons and rail span of 210 meters, the crane is the biggest Goliath gantry crane in the world.

Ordered by Engevix Construções Oceânicas (‘Ecovix’), the crane was provided by Konecranes, the world’s leading provider of lifting equipment to Shipyards, who received the crane order in October 2011.

The crane will be used initially to assemble eight hulls of Floating Production Storage and Offloading (FPSO) ships that will be used for offshore oil production projects.

Construction of the crane components began in October of last year, in Finland and South Korea. Installation at the Polo Naval do Rio Grande shipyard is scheduled to be finished at the end of this year.

President of Ecovix, Gerson de Mello Almada, says: “With the installation of the Goliath gantry crane we will contribute to the productivity of the Polo Naval do Rio Grande shipyard – already known for having the biggest drydock in Latin America – so it will be better prepared and become more competitive to face the challenges of naval assembly with high technology for the national and international markets.”

“Ecovix has expansion plans for its Brazilian shipyards, and we intend to build a strong partnership in the coming years,” comments Tuomo Lehtonen, of Konecranes, who was responsible for the project.