Wind powered ships could reduce fuel use by 30% 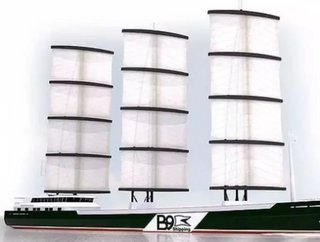 Follow @WDMEllaCopeland If the worlds shipping industry were a country, it would be the 6th largest emitter of greenhouse gases in the world. With ship...

If the world’s shipping industry were a country, it would be the 6th largest emitter of greenhouse gases in the world. With shipping emissions alone responsible for around 60,000 cardiopulmonary and lung cancer deaths each year, freight ships are among the biggest gas guzzlers in the world, emitting 1.12 billion tonnes of CO² in 2008.

Despite their massive CO² output, sea freight is still considered to be one of the more efficient ways to transport goods. However, the fossil fuels they depend on are running out, prompting designers to look into more ecologically friendly designs.

Ship designers are looking into a variety of different methods to decrease the fuel consumption of these goliaths of the sea, including narrowing the hull to create a more streamlined design, replacing bunker fuel with liquid gas or encouraging ships to travel more slowly.

One of the most revolutionary areas of search, however, is looking to our ancestors to utilise one of the oldest sources of power- wind.

Earlier this year, the University of Tokyo developed a model of their eco-friendly freighter, the ‘UT Wind Challenger, a normal freight ship which features 164 ft telescoping sails. The aluminium and fibre-reinforced plastic sails would rise above the deck when wind conditions are good, and are hoped to cut fuel consumption by around 30 percent.

An alternative ship which is already being tested had been designed by B9 Shipping (pronounced benign), part of the B9 Energy Group which is based in Northern Ireland.

Powered by a Rolls-Royce biogas engine, the B9 ship has three masts, which rise to a height of 55 metres, the height of a 14-story building. The ship, which is designed to use no fossil fuels, is the brain child of researchers at the University of Southampton.

According to a founder of the project, Diane Gilpin, there is an economic case for deploying the B9 ship on certain trading routes. The next step is to seek financing for a full-size ship, which would cost $45 million to build.

This new technology should appeal to chartering companies and ship owners, who currently have to stump up astronomical amounts for bunker fuel, which has risen in price by 600 percent in the last ten years.

Several restrictions are also being phased in to reduce the amount of carbon emitted by the shipping industry. In addition to this, a new rule which becomes effective this month, states that only low-sulphur oil can be used in North American waters, which costs 60 percent more than bunker fuel.