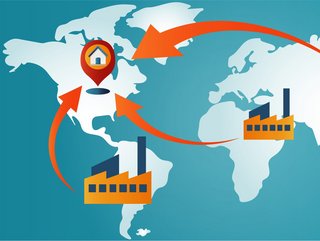 Nearshoring and reshoring could take decades to implement as a response to ongoing supply chain disruption, the sourcing chief of a multinational sportswear company has said.

New Balance Senior VP of Strategic Sourcing and Quality, Duncan Scott, told a Cornell University webinar that global logistics is continuing to be hit by the “whiplash effect” of the pandemic, when demand initially dropped off, only to come steaming back online.

Scott said he expected the supply bottlenecks that this has created “to continue through 2024 at least.”

He went on to discuss whether New Balance would respond by reshoring, and said he felt “there will not be any kind of natural reason for that to happen on a large scale”.

Reshoring is means to mitigate risk in supply chain

Reshoring is a strategy that sees manufacturing brought back within a country’s borders from overseas. Electronics companies such as Samsung are committed to reshoring, as a way to protect against future disruption of the microchip supply chain.

Like, Samsung, much of New Balance’s manufacturing centres are in Asia, with seven out of 10 of its global production hubs located in this region.

Scott said: “Size really matters, so this concentration of industries in Asia is going to be hard to shift quickly in any meaningful way. It would take years, if not decades, for that infrastructure to grow.

“Nearshoring and onshoring does have value, for the more fashion-oriented product in particular. You will see some reshoring. But the only way that's really going to work is if you have unique products.”

New Balance facing shipping delays of up to four weeks

Speaking about current levels of supply disruption Scott revealed that - upon New Balance products being completed - it can take up to four weeks for the company to book a space on a ship, whereas pre-pandemic “it used to take just a few days.”

This, he said, adds “between 20 and 45 days in transit time between the key source countries in Asia and the key markets in Europe and North America.”

Scott also said that shipping costs had increased hugely, from around $1,700 to $22,000 to ship a container from Asia to the west coast of the US.

He went on to explain the company has responded to ongoing supply challenges by:

• Ramping up production in manufacturing plants closer to key markets, such as in the US and UK

• Redistributing production across locations with fewer pandemic restrictions, such as Indonesia.

Scott continued: “A diversified portfolio of suppliers, which includes diversifying over multiple countries, is really important.

He also revealed New Balance is not planning to pass all of the increased costs it is facing on to consumers - and that the company’s sourcing strategies were the secret here.

He said: “Certainly we’re seeing material prices going up but we cannot pass all of these costs on to our consumers. So that puts a squeeze on profits. But the whole nature of the work that we do, especially in sourcing and operations, is trying to find ways to mitigate ever-rising costs.

“On the factory floor, there’s a lot of running room for increasing efficiency to offset rising material costs.”