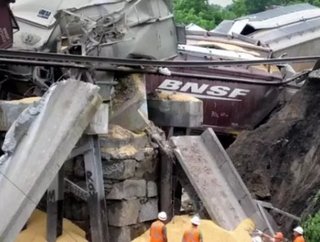 A freight train on its way to North Dakota derailed on Saturday morning, injuring two railroad workers and spilling corn and diesel fuel into a Minneso...

A freight train on its way to North Dakota derailed on Saturday morning, injuring two railroad workers and spilling corn and diesel fuel into a Minnesota creek.

Sixteen of the 17 Burlington Northern Santa Fe freight cars will be scrapped following the derailment. The cause of the derailment is being placed on heavy rains that caused a washout of the embankment supporting the railroad tracks on a bridge in Fridley, Minn.

According to a statement released on Saturday afternoon, Northstar commuter rail service between Big Lake and Minneapolis is expected to be out-of-service until Tuesday morning because of the impassable track.

The track is used to carry passengers into the Twin Cities area for morning and evening commutes and for Minnesota Twins baseball games.

The only good news stemming from the freight train development is the limited damage the derailment caused. Because the accident occurred on a Saturday, there was far less commuter traffic than usual.

Each weekday, the Northstar trains carry about 2,400 passengers on 12 trips between Big Lake and Minneapolis. The average traffic on Saturday for six trips is 1,250.

Less than 10 hours after the BNSF freight train derailed, a commuter service was scheduled to carry passengers to a Twins baseball game, with the service expected to carry about 700 fans to the game.

The freight derailment was a close call, writes Chris Steller of FridleyPatch.com. With no deaths in the accident, those in the Midwest can breathe a collective sigh of relief.