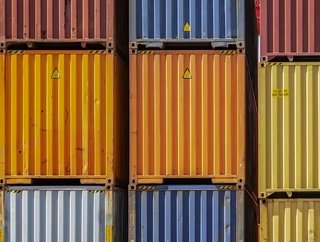 The shipping container was patented 65 years ago this month. The 'wheel ' of its time, it gave rise to globalisation as we know it today.

Today (December 12) is the 65th birthday of an invention that has transformed trade from being regional, to global: the shipping container.

It was on this day in 1956 that a patent was granted to US logistics businessman, Malcolm McLean for his ‘intermodal shipping container’.

McLean’s invention would go on to revolutionize transport and international trade in the second half of the twentieth century. Containerization led to massive savings on freight transport, by removing the need for multi-staged handling of individual cargo items, and cut inventory costs by shortening transit time. Containers also improved reliability and cargo security.

Today, there’s around 17 million shipping containers in use globally. The number of containers at sea at any one time is said to be roughly 5 million, while 200 million container trips are made every year.

Yet even back in 1956, containerised transport was nothing new. It has its origins in the 18th century coal mining regions of England, when wooden containers were ferried via canal on specially designed boats known as ‘Starvationers’.

Post-war world was ready for the shipping container

But it wasn’t until McLean came along that the world had a container around which a global freight network could be built. Like many of the world’s most important inventions, it was as much the timing of it as its ingenuity that would prove telling.

In 1956, the world was still recovering from the Second World War, and it was war that had shown nations the possibilities of global logistics. This planted a strong desire for trade to become more international in scope.

This was the backdrop when McClean had his brainwave. His background was actually in haulage, not shipping. But keen to expand into new territories, he acquired two WWII oil tankers, and formed the Sea-Land Shipping company. These he converted into the world’s first container vessels. The maiden container journey was in April 1956, when the SS Ideal X in April 1956 carried 58 containers from New Jersey to Texas.

Although containerisation would go on to revolutionise shipping, its introduction took a decade. With economies still recovering from war, nations were concerned at the infrastructure investment needed if ports, roads and railways were to cope with vast volumes of container traffic.

Trade unions also worried about job losses among port and dock workers, and there were port strikes the world over.

Vietnam was catalyst for container adoption

But once more it was war - this time in Vietnam - that proved the catalyst for the adoption of containerised transport. Because the US military needed to ship equipment to its troops quickly, they turned to McLean’s solution.

Businesses across the world took note, and in 1966 the first container ships were pressed into international service, when a container liner service was introduced from the US to Rotterdam in the Netherlands. Containerization had arrived.

Container vessels could be loaded and unloaded in a few hours, compared to so-called ‘break-bulk cargo vessels’, where items were handled individually. As well as reduced labour costs, cargo theft was drastically cut, as containers were sealed before departure and could not be opened until arrival. And because the steel containers were stackable, uniform in size and built from steel, en-route breakages were massively reduced.

These across-the-board savings allowed shipping companies to invest heavily in a new breed of container vessel, a result of which was shipping times were slashed.

In the intervening years, McLean’s design has been modified and improved. In 1968 - following agreement between European and US railways, haulage companies and international shipping companies - ISO 668 was introduced, and this defines the container dimensions in use today.

The one real innovation around containers is collapsibility.

In 2013, 4Fold’s 40-foot metal boxes became the first foldable units to get certification from the Container Safety Convention and International Organization for Standardization.

Also, today a total of 15 carriers and shippers are testing the Netherlands-based Delft company’s folding container. These can be folded into a quarter of their volume, taking up less space on trucks, ships and docks.

This is important, because according to the Boston Consulting Group, 27 per cent of the 862 million crates that pass through the world’s ports every year are empty. The cost to the shipping industry of moving empty containers is $20 billion a year, they estimate.

But essentially, containers have remained unchanged for 65 years, since McLean’s prototype. As inventions go, it might even be called the ‘wheel’ of its day.