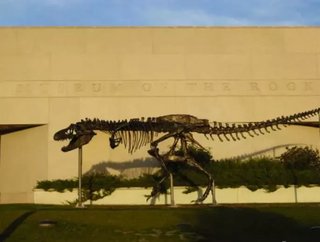 A 65 million-year-old Tyrannosaurus Rex has been traveling in a dedicated custom truck via FedEx to the Smithsonian Institution National Museum of Natu...

A 65 million-year-old Tyrannosaurus Rex has been traveling in a dedicated custom truck via FedEx to the Smithsonian Institution National Museum of Natural History in Washington D.C, USA, and is due to arrive today.

The skeleton which is on loan from the Museum of the Rockies in Montana for the next 50 years, is going to travel on a specially branded Custom Critical truck. For its safety and security, the T-rex will be monitored around the clock by FedEx shipping innovations including ShipmentWatch and SenseAware™ that ensure its temperature is maintained throughout the journey. Once it arrives, the T-rex will be the centerpiece of the new dinosaur hall at the National Museum of Natural History.

Rancher Kathy Wankel first discovered an arm bone of the dinosaur in 1988 in the Fort Peck Reservoir – the first T. Rex arm bone ever found. Afterwards, a team initiated an intense excavation around the reservoir. The search resulted in the unearthing of 80% of the dinosaur’s skeleton and the Nation’s T. Rex is now regarded as one of the most complete specimens known to man.

Mark Robinson, the Museum of the Rockies director of marketing, said: “The T. rex set off to the nation's capital with a police escort through downtown Bozeman as crowds cheered the truck carrying it, this following a two-hour send-off celebration”

FedEx Custom Critical (FCC), the FedEx operating company charged with transporting the skeleton, have worked closely with museum personnel from both the Museum of the Rockies in Bozeman, Montana, and the Smithsonian to strategically place the bones on pallets and develop a safe and secure packing method prior to embarking on the four-day trip.

Virginia Albanese, president and CEO for FedEx Custom Critical, which handles high-end cargo, said:  “Each crate needs to go in a specific spot inside the temperature-controlled truck because it's important not to have too much weight over any one axle.”

Some of those innovative features include:

Technology called FedEx ShipmentWatch featuring SenseAware, which offers near real-time monitoring of environmental factors such as location, temperature, humidity light exposure and barometric pressure; On-board satellite through the FCC SecureComm Command center that allows the truck to be tracked 24 hours a day, seven days a week, 365 days a year; and OmniTracs technology (formerly Qualcomm) that allows the FCC team to directly communicate with drivers.

A “chase vehicle” (FCC van) that follows the truck and will assist with any potential issues during the transport. GPS technology will also guide the driver along the fastest, safest route. And a member of the FCC team is always watching the shipment’s progress, temperature levels and security from the Command centre.

FedEx is no stranger to unique shipments. The company works with museums, art galleries, and NASA among many others on a regular basis to support the safe delivery of priceless artefacts and equipment.