UAE's Beyond2020 to open aquaponics facility in Peru 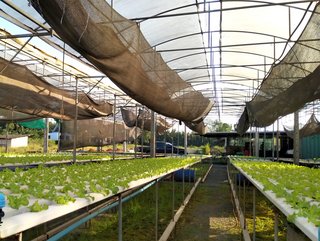 Built to help support the indigenous inhabitants of the Yarinacocha district, the new centre will increase food production in a sustainable fashion

The United Arab Emirates’ humanitarian program known as Beyond2020 has expanded in Latin America for the first time after a project was commenced that would see 2,000 people in the Yarinacocha district of Ucayali, Peru be trained in operating an aquaponics system which will aid the cause of food security for 5,000 indigenous inhabitants while also helping to preserve the biodiversity of the region.

INMED Partnerships for Children was awarded the contract by Beyond2020 to deploy its commercial aquaponics system, known as Aquaponics Social Enterprise Model, on the campus of Peru’s largest indigenous teacher training school, the Center of Excellence of the Bilingual Higher Pedagogical Institute of Yarinacocha (Instituto Superior Pedagógico Bilingüe de Yarinacocha).

The model brings together fish farming and vegetable production in closed system, allowing organic vegetables to grow at a rate 10 times faster than traditional food production and uses 90% less water and 75% less energy. It is also able to produce food year round and is not tied to the traditional weather cycles of production. In this regard, it is especially resilient to the vicissitudes of climate change. Additionally the aquaponics centre – the first of its kind in the Peruvian Amazon – is the first one in the region to be entirely powered by solar energy.

Technical skills will also be taught to help develop the workforce in the region.

Commenting on the move, the UAE Ambassador to Peru, Mohamad Abdulla Ali Khater Alshamsi, said: “The Beyond2020 project offers the indigenous people of Ucayali a sustainable, fully-rounded solution spanning clean energy, food production and water. It brings long-term social and economic benefits through a focus on promoting knowledge exchange and training that aims to equip the local community with the skills and know-how needed to further advance their economic development.”

The aquaponics centre will arrive at an ideal time for the community. The Covid-19 pandemic served to compound the issues that the new centre will address. For instance, the inconstant closure of schools have been deleterious for school meal programs and have generally exacerbated the problem of hunger among the community.