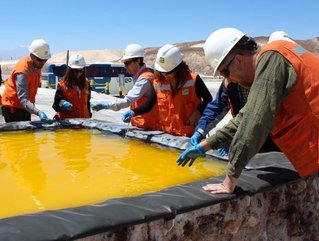 Scope 3 emission hot spots tend to be concentrated in the downstream supply chain, close to the production of raw materials, a new Accenture study shows. Here, British Geological Survey workers analyse lithium brine in South America. Lithium is an important element in the manufacture of batteries. (IMAGES COURTESY OF BRITISH GEOLOGICAL SURVEY).
Accenture report shows that businesses are struggling to control Scope 3 emissions because of a lack of contact with downstream suppliers in value chain

Progress on cutting Scope 3 emissions in the supply chain are being hampered by upstream suppliers with whom organisations have no direct contact, according to a new report by Accenture.

‘Upstream’ in a supply chain includes all activities related to value chain third parties that source raw materials to send to manufacturers. The report – called Thought you knew the Scope 3 issues in your supply chain? – examines carbon ‘hot spots’ in supply chains.

The findings echo those of another Accenture study, that shows just 7% of companies are on track to reach their net zero commitments.

The Scope 3 study highlights upstream emissions by country, industry and supplier tier. In German automaking, for example,  it reveals emissions beyond known suppliers in Germany and China to those buried deeper in supply networks from countries such as Poland and South Africa.

The report compares upstream Scope 3 emissions with Scope 1, which are emissions from sources that an organisation owns or controls directly.

Accenture’s analysis reveals that in most cases if upstream emissions are a significant portion of a company’s total emissions, they tend to occur deeper in the supplier network.

It shows that upstream Scope 3 emissions for the aerospace and defence industry is many times the size of its Scope 1 and 2 emissions, and that these upstream emissions are buried deep in its upstream supplier network. A mere 20% of its emissions come from its Tier 1 suppliers.

“Scope 3 emissions are elusive and difficult to track in today’s complex supply chains,” said Kris Timmermans, Accenture’s Supply Chain lead. “Many large companies don’t even know the suppliers beyond Tier 1, let alone have any sort of influence or control over them or their sustainability practices, which is why we have seen little progress in reductions to date.”

Timmermans added: “Armed with the knowledge of where their emissions sit, companies can take action and collaborate with the entire supplier base and all stakeholders, toward a more sustainable future."

Peter Lacy, Accenture’s Sustainability Services Lead and Chief Responsibility Officer, said: “Tapping into carbon intelligence is an important piece of the puzzle in converting sustainability ambitions into action and impact.

“Tomorrow's leaders are collaborating today to enable circularity and increase sustainable outcomes across the value chain.”

As part of the study, Accenture published advice on how to achieve supply chain visibility: