Is this the world's quietest forklift? Hiab Moffett & Bosch Rexroth 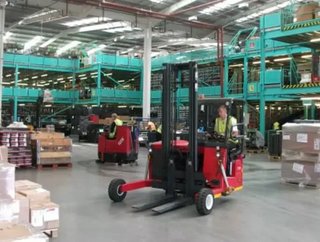 Hiab Moffett has been at the forefront of the materials handling industry for more than 45 years. After observing increasing demand among its customer...

Hiab Moffett has been at the forefront of the materials handling industry for more than 45 years. After observing increasing demand among its customer base of manufacturers, warehouse operators and supermarket chains for quieter materials handling equipment, the company set to work creating the world’s quietest Truck Mounted Forklift.

In order to ensure the machine’s operation could be as silent as possible a key area of focus was the gear pump (pictured, right). With Bosch Rexroth already supplying hydrostatic drives and gear pumps across the vast majority of Hiab Moffett’s Truck Mounted Forklifts, Kevin Turnbull, Engineering Director, approached Craig Grant, Mobile Applications Manager at Bosch Rexroth, to see if the company could provide a solution.

Speaking about Hiab Moffett’s decision to develop a near silent Truck Mounted Forklift, Turnbull said: “There has been a trend in recent years, where deliveries are not just to typical building sites or industrial estates, but also to residential areas. With this increased move towards more residential areas, operators need to be aware of lower noise emission thresholds, particularly at night or in the early morning when most supermarket deliveries take place.

“Because of this we were seeing increasing demand for quieter fork lift trucks, and took it upon ourselves to develop a near silent version for those customers where keeping noise pollution to a minimum is a top priority.”

Speaking about the project, Grant said: “Having worked with Hiab Moffett for a number of years, we knew that noise pollution was becoming an increasing concern for the company’s customer base. While there was a product on the market that professed to reduce noise emissions, it hadn’t been specifically developed for mobile applications.

“Fortunately, when Hiab Moffett approached us we had just brought a product to market that, as well as meeting its demands for an electrically powered pump, operated with near silent hydraulic functions.”

Developed specifically for mobile applications, and forklift trucks in particular, the Rexroth Silence Plus Gear Pump was highly commended in the Noise Abatement Society awards 2011, and provides a more robust bespoke design for use on moving vehicles.

To demonstrate noise reduction potential of the new pump, Craig provided sound files of a traditional gear pump running at 1500 rpm across different pressures alongside the company’s silence pump and the latest silence plus pump.

Describing how the new Silence Plus Gear Pump is able to reduce operational noise Craig says: “In a traditional external gear pump there is a single point non-continuous contact between the tooth and the groove, which results in pulsation of the fluid and it is this pulsation that causes much of the vibration that results in high operating noise.

“The reason we are able to reduce operation noise by an average of 15 dBA is that the Silence Plus Gear Pump features a round tooth profile, which allows fluid to flow continuously, as a result of permanent tooth contact. The reduction in pump vibration, which is typically as much as 75 percent, also reduces vibration in other components in the hydraulic system, which means it can make a significant impact on the noise of the machine as a whole.”

In order to ensure the new gear pump was up to the challenge of a mobile application, Bosch Rexroth added its own patented wear free axial force compensation technology to improve longevity.