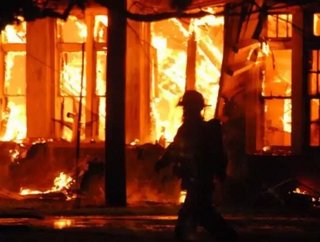 A rash of warehouse fires in New Jersey has prompted a federal investigation to try and figure out if the fires are linked or part of an arsonist ring...

A rash of warehouse fires in New Jersey has prompted a federal investigation to try and figure out if the fires are linked or part of an arsonist ring.

Five warehouse fires have been reported in old or abandoned warehouse buildings in Camden’s old industrial center over the past 30 days, with the latest blaze happening last night.

The two-alarm blaze was quickly contained, but the upper floor of the two-story Clement Coverall Co. plant collapsed in the latest warehouse fire.

Ben Cracolici was staying with friends across the street when the flames engulfed the warehouse.

“The smoke was outrageous,” Cracolici told Philly.com. “We were lucky the smoke was blowing away from the house.”

The Clement Coverall Co. plant was the fifth warehouse fire reported in the last 30 days. The third fire, reported on June 20 at a former detergent factory in East Camden was ruled arson, but the other four fires are still under investigation.

The first fire, a 12-alarm blaze reported on June 9 at a former tire-distribution center, damaged 23 buildings, 10 of which were occupied. More than half of the buildings suffered severe damage, and 16 families were left homeless following the fire.

According to Philly.com, Camden has roughly 3,000 abandoned buildings, “many of which are used frequently by drug dealers, prostitutes and scrap metal thieves.”