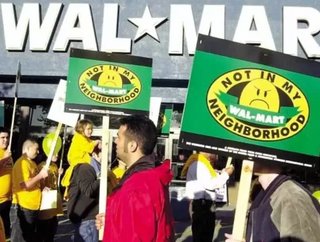 Not every country in the world is lining up to support Wal-Mart and its expansion plans. Big surprise there. The warehouse and shopping giant is close...

Not every country in the world is lining up to support Wal-Mart and its expansion plans. Big surprise there.

The warehouse and shopping giant is close to taking over African counterpart Massmart, but the deal is being met with a good amount of protestfrom all over the globe. Most recently, Wal-Mart’s deal with Massmart is being denounced by Argentina.

The Anti-Wal-Mart Coalition, which is made up of various trade unions that represent millions of workers, has teamed up with Argentinean economic advisors who are also against the acquisition of Massmart buy Wal-Mart.

“Instead of buying products, Wal-Mart de Argentina offers a ‘sale spot’ to suppliers, who bear the cost of the unsold merchandise,” Sofia Scasserra, an economic advisor to Argentina, told the Huffington Post. “In the event the product sells, the supplier gets paid, but if the product does not sell, then it was deemed never to be Wal-Mart’s to begin with, and therefore the supplier bears the full adverse effect of the unsold stock.”

Scasserra is advising the South African Tribunal to force Wal-Mart stores to be located in the “outskirts of the city,” which could give the smaller neighborhood stores a fighting chance at survival.

When Wal-Mart’s takeover finally goes through, at least South Africa can’t say it hasn’t been warned.