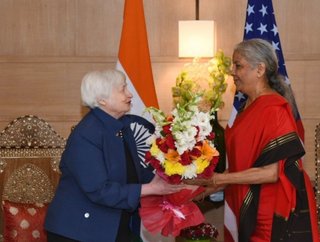 US Treasury Secretary Janet Yellen meets with Indian Finance Minister Nirmala Sitharaman. Both women called for a strengthening of supply chains with “trusted trading partners in the Indo-Pacific region” - a ‘friend-shoring’ deal driven by a mutual distrust of China.
Whitehouse bid to cut China & Russia adrift by 'friendshoring' its supply chains will not bring resilience and risks being divisive, say top academics

Two top business academics have warned that US plans to ‘friendshore’ goods rather than source them from Russia and China will not only fail to produce resilient supply chains but create even  more geopolitical instability, by driving wedges between countries and encouraging nationalism.

In an Executive Order from the Whitehouse on supply chain strategy earlier this year, the Biden administration warned that – because the US cannot make, mine, or manufacture everything itself – it must “cooperate with our allies and partners to foster and promote collective supply chain resilience”.

Friend-shoring now seems set to become US policy, as was evident in US Treasury Secretary Janet Yellen’s recent meeting with Indian Finance Minister Nirmala Sitharaman, during which both women called for a strengthening of supply chains with “trusted trading partners in the Indo-Pacific region”.

The US-India move is driven by the countries’ mutual distrust of China as a trading partner, as well as geopolitical uncertainty arising from Russia’s invasion of Ukraine.

But a pair of top economic academics from Australia say that the policy of swapping out trade partners such as China and Russia with those of ‘friendly’ nations is ill-advised.

Adam Triggs is Director at consulting firm AlphaBeta, and a Visiting Fellow at the Crawford School of Public Policy at the Australian National University (ANU).

Samuel Hardwick, meanwhile, is an Economist at ANU, and a former policy advisor to the office of the Australian Prime Minister.

Writing on East Asia Forum – a website focused on economics, politics and public policy in East Asia and the Pacific – Triggs and Samuel say it is a “fallacy” that the US approach of friend-shoring can make supply chains robust.

The pair say: “Taken at face value, friend-shoring seems like an economically conscious alternative to onshoring. Deepening and broadening trade relationships is a broadly held economic and strategic priority.

“But if friend-shoring is just decoupling from China by another name, rather than smarter international cooperation, the economic fallout is likely to be vast and volatile.”

They point out that China’s global value chain-related output – the value of a country’s production that crosses at least two borders – is the highest in the world, and that China is also the world’s top exporter of “intermediate inputs”, particularly in the electronics sector.

Intermediate input is goods and services – including energy, raw materials and semi-finished goods – that are used in the production process to produce other goods or services, rather than for final consumption

Intermediate inputs of an industry are the goods and services (including energy, raw materials, semi-finished goods, and services that are purchased from all sources) that are used in the production process to produce other goods or services rather than for final consumption

Triggs and Hardwick also say that another downside of friend-shoring is “it facilitates nationalist policies that undercut the strategic benefits of openness”.

They say that such benefits include export revenue for research and development investment, inflows of talented personnel and the ability to find synergies with foreign firms.

They add: “the ‘friends’ in friend-shoring initiatives will also have their own risks to weigh up, not least of which are the global economic impacts of splitting supply networks into blocs, including higher prices.

World 'bigger than China, US and US allies'

“The world is bigger than China, the United States and the US-allied sphere. Non-aligned partners will want evidence that economic and security cooperation is mutually beneficial, inclusive and addresses geopolitical tension rather than exacerbating it.”

US friend-shoring is largely seen as a product of Donald Trump’s trade wars, the Covid-19 crisis and Russia’s invasion of Ukraine, all of which have called into question the vision of a globalised economy.

But the writers highlight acute concern in the South East Asia region about the potentially damaging affect of the trade policy.

Triggs and Hardwick cite Singaporean Prime Minister Lee Hsien Loong’s recent comments, in which he warned that by friend-shoring, countries run the risk of limiting regional growth and cooperation, and deepening divisions between countries.

“It might precipitate the very conflicts that we all hope to avoid,” Loong said.

The academics’ concerns over friend-shoring are borne out by a recent report on securing semiconductor supply chains from the Center for Strategic and International Studies, which concluded: “While moving supply chains away from east Asia could increase security in the long run, an ill-conceived implementation of this friendshoring strategy could result in price hikes and a stronger China over time.”