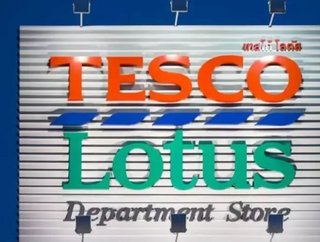 The Asia CEO for Tesco, Trevor Masters, has praised the company&#39;s latest structural investment in the Khon Kaen province as they experience continue...

The Asia CEO for Tesco, Trevor Masters, has praised the company's latest structural investment in the Khon Kaen province as they experience continued growth in Thailand and other countries in South Asia

UK-based supermarket giant Tesco, who operate as Tesco Lotus in Thailand and earns more than £3 billion in revenues, has opened a new distribution centre in the country.

The facility in the Khon Kaen province, which will support business growth and serve customers in the north east, has been described as being a place that would be cutting edge anywhere in the world by the Asia CEO Trevor Masters.

Masters said: “Facilities like Khon Kaen DC will help us to pursue our strategy of disciplined international growth. It will allow us to grow our market share in a region with huge opportunity – in this case the developing upcountry areas of Thailand.

“It is the expertise we deploy at facilities like Khon Kaen which will help us to succeed in those bigger markets of India and China. As we enter into partnerships in these countries to help us find better ways of growing, we’re bringing those world-leading distribution and supply chain skills – developed in DCs around the globe – to complement our partners’ local market knowledge.”

The hub has been created to take the pressure off the retailer's central depots in the capital city of Bangkok and will service area of 52,000 square metres, making the structure one of the country's biggest distribution centres.

The distribution centre will be the fifth one in Thailand, with the others being centred nearer the Bangkok region. They serve Tesco Lotus stores of all formats in the north eastern region, from the smallest Express marts to the biggest Extra stores.

Tesco only entered Thailand in 1998 but has become one of the company’s best performing businesses. The company has bounced back from the devastating floods in Thailand in 2011. Tesco’s response to the disaster won praise as it built temporary bridges and provided rowing boats to help customers buy their food from affected stores. Chris Bush, the head of Tesco Lotus during the crisis, is now the chief executive of Tesco’s UK business.