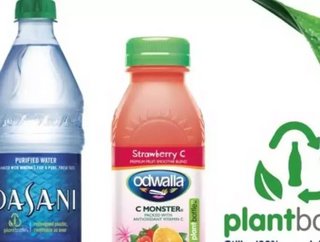 If you thought only small companies came out with innovations that impacted the supply chain community, think again. The Coca-Cola Company, which offer...

If you thought only small companies came out with innovations that impacted the supply chain community, think again.

The Coca-Cola Company, which offers more than 500 brands in over 200 countries worldwide, has started rolling out its new PlantBottle across multiple brands, including Coke, Dasani and Minute Maid.

Coca-Cola’s Scott Vitters, the General Manager of the PlantBottle Packaging Platform, didn’t stop there, however.

“It’s definitely a breakthrough technology, and I’d go as far as to say that it’s a disruptive technology,” Vitters said.

The technology starts with Coca-Cola’s manipulation of commercial plastic polyethylene terephthalate (PET). Coke has found a way to substitute 30 percent of the plastic with renewable, plant-based materials that make the bottle fully recyclable.

The company is projecting that carbon emissions could be cut up to 25 percent compared to traditional PET bottles that were formerly used. An important footnote in Coca-Cola’s breakthrough is that PlantBottle doesn’t affect any part of the value chain. According to Vitters, the PET manufacturing, the bottle converting process, the consumer end product and the recycling is identical to a normal PET-based bottle.

According to Vitters, the company stumbled across this breakthrough almost by accident.

“We eventually kept asking ourselves ‘Why are we even looking beyond PET to begin with?’” Vitters said. “In doing that, we started looking at how PET was made, and discovered that we could make PET from plant material.

“In a sense, we came up with a solution that was revolutionary, and also evolutionary.”

What’s also been extraordinary about PlantBottle has been the speed at which Coca-Cola has introduced the product into the marketplace. The new packaging platform is being used in 20 markets around the world, and Coke projects that there will be seven billion products in the marketplace by the end of 2011.

According to Vitters, that puts the company right on track to meeting its target of having 100 percent of its plastic bottles with plant packaging material by 2020.

Coca-Cola is hoping its expansive use of the plant-based commercial plastic will lead to transformation within the industry. From the looks of things in the retail industry, they’re right.

“You see Toyota looking to build a plant leveraging technology to build plastic inside of cars, and I just saw AT&T looking at PlantBottle technology for their packaging,” Vitters said.

Accordingly, Coca-Cola built its PlantBottle supply chain to accommodate what it expects to be a surging demand for its new type of plastic.

“When we were building the supply chain, we knew we would be building a supply chain that was bigger than just meeting our needs,” Vitters explained “We ultimately decided this innovation would benefit the entire industry.”

Eventually, Coke plans on designing a bottle that is 100 percent plant-based material, but for now, they’ll settle for being the flag-carriers of this green packaging movement.

“What’s really exciting about this technology is that we’re only at the beginning of our journey,” Vitters said. “This is going to be bigger than Coke, and people are starting to realize that.”