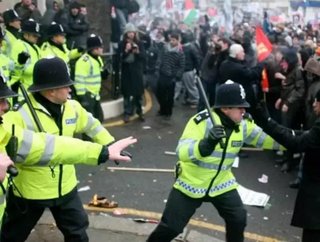 The England riots are starting to have an impact on the countrys supply chain. As violence swept through the UK again last night, it was revealed that...

The England riots are starting to have an impact on the country’s supply chain. As violence swept through the UK again last night, it was revealed that rioters set ablaze and destroyed a Sony distribution center in London on Monday, the third night of the violence.

The 20,000 square meter, two-story Sony Digital Audio Disco corporation warehouse in Enfield was set ablaze on Monday night, and the blaze wasn’t under complete control until Tuesday at 11 a.m. The building partially collapsed and was completely destroyed, the London Fire Brigade said.

PIAS, a music distribution company, had stock in the warehouse, and spoke to IFW.net.

“Sony has identified a temporary distribution partner and it is envisaged that they will be in a position to pick, pack and ship orders next week,” PIAS said.

Global shipping leader DHL said deliveries had been disrupted in certain areas of London, and the company is closely monitoring the situation for potential road closures.

GRAPHIC FOOTAGE FROM THE RIOTS

The London rioters have taken to the streets in Manchester, Liverpool, Nottingham, Birmingham and Salford, looting stores, warehouses and homes.

The riots began when 29-year-old local Mark Duggan was shot and killed during an attempted arrest. Duggan, an alleged crack cocaine drug dealer and ‘Star Gang’ member, was reportedly carrying a loaded handgun, but there is no evidence that he fired on police officers before being shot.

A peaceful protest of about 200 people in Tottenham was held, and eventually turned ugly, sparking the London riots.

The England riots continued to rage on for the fourth consecutive night yesterday even after Prime Minister David Cameron came back from vacation early.

England’s leader made it clear that the city would up its London police force to 16,000 to fight the unrest. London had about 6,000 officers patrolling the capital’s streets on Monday.

Over 1,100 arrests have been made so far in England stemming from the riots.