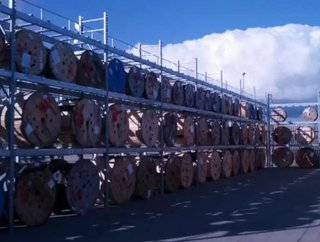 The MacLean Electrical Group has reported that it has increased its cable drum storage capacity by 20 percent, by using a combination of adjustable pal...

The MacLean Electrical Group has reported that it has increased its cable drum storage capacity by 20 percent, by using a combination of adjustable pallet racking and cantilever racking made from galvanised steel.

The MacLean Electrical Group is a global electrical distribution company specialising in the supply of electrical products, lighting systems and cables for harsh and hazardous environments.

Noskab is the Group’s specialist cable division and supplies cables for onshore and offshore projects. Its purpose-built storage facility in Aberdeen houses a large inventory of specialised electrical products and cables for what is a highly demanding market.

Noskab’s warehouse unit was recently expanded and now provides over 1000 square metres of storage space. The store features 50 bays of adjustable pallet racking which gives 400 pallet positions, plus 100 bays of shortspan shelving for small parts storage. Both the racking and shelving systems were supplied and installed by RediRack’s Authorised Partner in Scotland, Axis.

An unavoidable consequence of the recent warehouse extension was a reduction in the amount yard storage available at the site, so Noskab approached Axis for a solution that would allow them to make more efficient use of their exterior space.

“We needed a quality, hardwearing storage solution that would allow us to store our cable drums in a smaller footprint outside in our yard. We had worked with Axis previously and had no hesitation in calling in their help and expertise,” says MacLean’s finance manager, Alan Freeland.

Because the site is located a stone’s throw from the North Sea, the storage solution had to be capable of withstanding the harshest weather conditions.

Axis therefore recommended a combination of adjustable pallet racking and cantilever racking made from galvanised steel.

A galvanised finish was essential as it doesn’t rust , while RediRack’s bolt free design  maximizes the rack structure’s stability .

To further enhance on-site safety, anti-collapse mesh was installed at the rear of the racking to protect operatives from objects that could, potentially, fall due to the high winds that gust across the exposed facility.

The adjustable pallet racking, which features drum cradles, has allowed Noskab to increase cable drum storage capacity by 20 per cent while the Cantilever racking is used to house other products that were not suited to the pallet racking configuration - such as various lengths of electrical cable trays.

By installing RediRack pallet racking Noskab is now able to store 800 pallets in a space that previously held 500.

“After expanding our facility we were left with less room outside, but the Axis solution has provided exactly what we were looking for,” adds Alan Freeland.

RediRack and Axis have been working together in Scotland for more than two decades. Billy Wood, Axis’s sales manager, comments: “We have partnered with RediRack on many major projects over the years, successfully delivering pallet racking solutions for a broad range of companies. We share the same belief in delivering quality storage solutions on time and within budget. There’s a lot more projects for us to work together on in the future!”