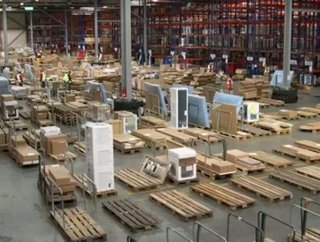 Anybody whos ever been in an IKEA warehouse knows all too well the familiar sights of wooden pallets stacked dozens of feet high. While the furniture g...

Anybody who’s ever been in an IKEA warehouse knows all too well the familiar sights of wooden pallets stacked dozens of feet high. While the furniture giant’s inventory management strategies aren’t changing, the materials used in the pallets are.

According to multiple reports, IKEA is replacing its traditional timber shipping pallets with lighter and cheaper corrugated cardboard platforms. The best part is that the eco-friendly switch won’t come at the cost of functionality, as the corrugated cardboard pallets and wooden pallets both support weights up to 1,650 pounds.

“We don’t know if the paper pallet will be the ultimate solution, but it’s better than wood,” Jeanette Skjelmose, sustainability chief at IKEA’s supply-chain unit, told Business Week.

IKEA uses 10 million pallets to help the company make shipments to its 287 stores in 26 countries worldwide, so making the switch to something more recyclable makes ecological sense. It also makes financial sense, as the Business Week report notes that the switch will cut transport costs by roughly 10 percent.

Those transport cost reductions are partially attributed to the lighter weight, as IKEA’s new corrugated cardboard pallets, at just 5.5 pounds, are 90 percent lighter than its timber counterparts. The new pallets are also smaller at just two inches high, which means IKEA can cram more pallets into shipments and further save on its own shipping costs.

“We hope this will be a start in making transportation systems smarter and freight as compact as possible,” Skjelmose says.

Some are more skeptical to the savings IKEA will inherit thanks to the pallet switch. Jeff McBee, a pallet analyst at Industrial Reporting, told Business Week that a switch to corrugated cardboard pallets might not bring the savings the company is predicting.

“This obviously looks good to IKEA on paper, but I’d like to see what they say a year from now,” he said. “I’m not necessarily skeptical, but [the cost savings] may be closer to a wash than they suspect.”