Electric scooters rev up the pace of warehouses 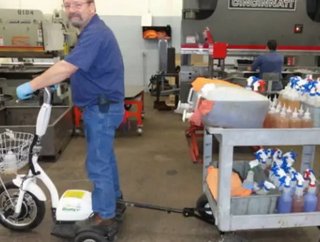 Article supplied by MightyLIft and GoPet scooters With the slow rebound of economy and two-three percent predicated growth in 2013, more and more busin...

With the slow rebound of economy and two-three percent predicated growth in 2013, more and more businesses look for ways to cut cost and increase productivity.  As a result, large manufacturing plants and distribution warehouses are increasingly turning to small electric scooters to shave off miles of unproductive walking time.

The goal: to recoup lost hours walking for more productive tasks, reduce wear and tear on employee’s bodies, and prevent the misappropriation of material handling equipment such as forklifts, taggers and pallet jacks for simply moving personnel around.

With the average walking speed estimated at 3.1 mph, even a distance of a half a mile and back, several times a day, can eat up four-five hours each week in walking time.  Multiply that by several employees and multiple shifts and the production loss adds up quickly.

Excessive daily walking also takes a toll in wear and tear on employees.  Even healthy personnel that travel daily throughout the facility can become fatigued, which can lead to mistakes, injuries or lost productivity.  This is exacerbated for older employees, those that have difficulty walking, and those with disabilities.

As a result, many plant, warehouse and distribution center managers are turning to small, one-person electric scooters as an economical, safe and eco-friendly solution.

Today’s leading industrial electric scooters can achieve speeds up to 16 mph, to distances of 25 miles on a single, ten cent charge.  Because they are small, they fit easily through standard doorways and narrow aisles found in many of today’s large warehouses.  They are also extremely quiet and operate without emissions, making it ideal for noise pollution and clean air standards.

Tasks in a plant or warehouse where scooters are ideal include supervisor rounds, picking small items from inventory, maintenance, and conducting inventory counts and meter readings, to name a few.

At a retail cost of less than two thousand dollars, the return on investment for an electric scooter can be as little as one month, if two-three people sharing the scooter save an average of one hour a day simply by not having to walk throughout the plant.

Within this complex, five million square feet is dedicated to housing approximately 50 different tenants, including Hallmark Retail, which ships gift products to hundreds of corporately-owned Gold Crown Hallmark stores throughout the United States.

After some investigation, Smith decided on a scooter with the option of several accessories, including a small trailer that can haul items up to 350 lbs of total weight, a small front basket for carrying small packages or other items, and the option of a seat for those that prefer not to stand while riding.

For Hallmark, the scooters are used by employees and facility managers for everything from supervision to researching inventory issues, identifying automation production issues, transporting paperwork and moving from one place to another.

General Manager Lona Smith estimates that each scooter saves employees up to 10 mile per day total in walking over the course of the company’s daily three shift operation.  Smith uses a scooter herself to conduct site surveys throughout the facility.

“It definitely frees up employee time they would have spent just literally walking from one location back to their office area to do other, more meaningful functions,” said Smith.

In search of a solution to cover the vast distances at SubTropolis, Smith initially approved the purchase of a golf cart.  However, she says it required a lot of maintenance, including frequent battery changes.

For Doug Buehl, Risk Manager at metal component manufacturer Clow Stamping, trips from one end of the company’s 250,387 square foot facility in Merrifield, MN of a quarter mile each way stimulated his desire for a better solution.

Initially, Buehl considered the Segway.  The Segway comes the closest to meeting the design functionality of an electric scooter, though at approximately three times the cost.

However, concerns over the safety of the Segway, which are two wheeled devices that require balance and leaning of the body to operate, along with the amount of time required to master this technique, deterred him.

After purchasing a scooter from a company called GoPet as a trial run, Clow Stamping purchased three additional scooters, to be shared among personnel operating in each of three 8 hour shifts.  The scooters are used for shift supervision, maintenance, and transportation of overnight shipping packages from the delivery area using the trailer cart accessory.

Buehl estimates that one key shift supervisor was walking over six miles each day, at a loss of two hours of time per shift.  Now, with the electric scooter, “he travels more distance than he could possibly walk in a day,” said Buehl.

He adds that the supervisor is one of many of the company’s current 400+ employees that have been with the company for 20-30 years, which means they are in their 50s and 60s.