The Biggest Buildings on Earth: From Airplane Assembly to Waterparks 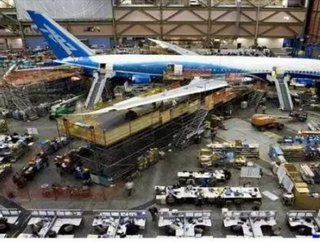 Since so many of you responded to our article &ldquo;The Top Warehousing Sites in the World&rdquo; as it appeared in our January issue of Supply Chain...

Since so many of you responded to our article “The Top Warehousing Sites in the World” as it appeared in our January issue of Supply Chain Digital, we decided to follow it up with a piece on the largest buildings in the world, by volume. The warehousing ones were big in their own right, but the mammoth feats of construction that you see below take the cake in terms of size. Usable space and floor space define the title ‘biggest building in the world’ so it should come as no surprise that three of the largest buildings are assembly lines for the biggest things humans can make: airplanes. Well, technically, one of these buildings is an assembly line for NASA’s Space Shuttles, but space shuttles are in the same ballpark as airplanes so we’ll count it. We think you’ll be surprised at No. 3 on this list.

1. Boeing Plant
Location: Everett, Washington
Floor Area: 398,000 square meters (4.3 million square feet)
Volume: 13.3 million cubic meters (472 million cubic feet)
Description: The Boeing Plant in Everett opened in 1967 and it rolled out its first 747 on Sept. 30, 1968. It was originally built to house the construction of the flagship 747 model, but it is now home to the 787 Dreamliner model, which Boeing is using as a new flagship moving into 2011 and beyond.
Video: 787 Dreamliner

3. Aerium
Location: Brandenburg, Germany
Floor Area: 70,000 square meters (753,000 square feet)
Volume: 5.2 million cubic meters (184 million cubic feet)
Description: The Aerium in Brandeburg is home to Tropical Islands, the largest indoor water park in the world. The Aerium was originally built to house the construction of a giant German gun ship, but the plans for that fell through. Now it’s home to an indoor tropical resort that sees over 8,000 visitors per day.
Video: Home Video of the Aerium

4. NASA Vehicle Assembly Building
Location: Brevard County, Florida
Floor Area: 32,374 square meters (348,000 square feet)
Volume: 3.66 million cubic meters (130 million cubic feet)
Descrip: Originally built for the simultaneous assembly of four Saturn V Rockets, the NASA Vehicle Assembly Building in Brevard County, Florida is home to all of NASA’s space construction and operations. To give you a little perspective on the height of NASA Assembly Building, consider that it’s 220 feet higher than the Statue of Liberty. On the guided tours given by NASA, the tour guides say this of the NASA Assembly Building: “If you could cut the Empire State building up into pieces, you could put it in the assembly building three and three quarter times.” Leave it up to the nerds at NASA to come up with such a convoluted way of saying, the size of the NASA Assembly Building is 3.75 Empire State Buildings. Go back to your cubicle, nerds. *Looks around at my own cubicle, sighs*
Video: NASA ASSEMBLY BUILDING TOUR

As always, please feel free to contact us at our Supply-Chain Digital Facebook Page and don’t forget to friend request me on my own personal Facebook page at Brett Supply Chain. Things are going to be a little different around here from now on, and I look forward to providing you with the very best supply chain stories and information. If you like what you see on our Facebook Page, then the next step is definitely linking up with our Twitter, which is where we provide the very latest news and updates for the supply chain executives of the world. Check it out: SupplyChainD. It's not just news though, I will be putting my own personal touch on these stories so that it's not just a reproduction of the news. You'll like it, I promise.

That's not too much for you to handle is it?