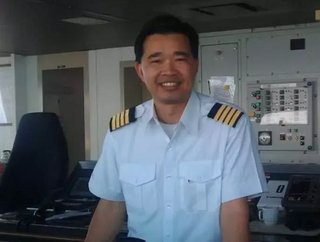 Captain Ngoc Nguyen always knew he wanted to be a captain on a Maersk Line vessel. 25 years later, that dream has come trueNgoc Nguyen is the captain of...

Captain Ngoc Nguyen always knew he wanted to be a captain on a Maersk Line vessel. 25 years later, that dream has come true

Ngoc Nguyen is the captain of Thomas Maersk, but his story begins many years ago on another vessel. “I was 13 years old when I first met a Maersk Line vessel” he said. “At that time I was a refugee. I was on a small boat sailing away from Vietnam to the Philippines.”

On the Arnold Maersk

In 1975, Clara Maersk had famously rescued 3,500 refugees fleeing the Vietnam War in the biggest rescue operation in the history of Maersk Line. In 1981, the war had been over for six years but refugees leaving the country were still abundant in the area. At this time Arnold Maersk was trading in the South China Sea.

One early morning, it spotted a small boat in the water and Captain Jørgen Orla Hansen decided to turn around and help. Some 60 people were taken on board, and one of these was 13-year old Ngoc Nguyen, along with his mother and three siblings. That event would be a turning point for young Ngoc.

“For me it’s just like yesterday,” he recalls. “I remember every detail from that time.” They were taken to a refugee camp in Hong Kong, and after six months Ngoc’s family were granted asylum in Denmark. Coming to Europe gave Ngoc a new life, but he always remembered that day in the South China Sea.

“At the time when I had to take an education, there was no doubt that I wanted to be a sailor,” tells Ngoc. “I wanted to be an officer or captain on board a Maersk Line vessel.” He joined Maersk in 1989 as a cadet, and incidentally his first ship was again Arnold Maersk. And when his first assignment as turn officer brought him to Mathilde Maersk, he met none other than the very same captain who had rescued him eight years earlier.

“I have no doubt that I have been very lucky and also very happy to be working with Maersk Line,” says Ngoc, who recently celebrated 25 years of service for Maersk Line at the end of August. Besides an office posting in Maersk Ship Design in China, and two years of service in the Royal Danish Navy, he has remained true to his boyhood dream of sailing under the white star.

In February, Ngoc was promoted to captain, and was given the keys to Thomas Maersk, sailing between Europe and West Africa.

“It was a young boy’s dream coming true, the day I became captain on Thomas Maersk,” he admits. And the memory of 1981 is still fresh in his mind. “Every time I’m back at sea and see small boats, I am aware that it could be a boat with refugees in the same situation.”

Earlier this year, Ngoc told the Maersk Post: “We have to fight for the things we want, and, in the end, maybe we will have a little bit of luck. In my case, my luck began on the day I met Arnold Maersk and went on to begin a new life.”