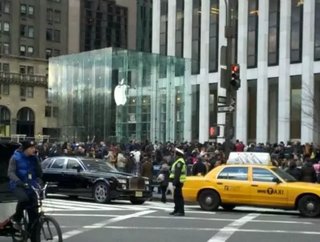 Youd think a company that specializes in selling high-end electronics would have its supply chain disrupted following the 9.0 March earthquake that str...

You’d think a company that specializes in selling high-end electronics would have its supply chain disrupted following the 9.0 March earthquake that struck Japan, one of the world’s leading manufacturers of electronic components.

Instead, Apple posted the biggest non-holiday quarterly revenue and earnings in its history. Apple reported earnings per share of $6.40 on revenues of $24.67 billion, good for an 83 percent increase over the same quarter a year ago.

The reason for the results is pretty simple, as Apple launched the iPad 2 and started working with Verizon in the company’s second quarter. Apple also saw the new Thunderbolt-equipped MacBook Pro line in the quarter.

What’s remarkable about all this is the fact that Apple is supplied heavily by Japanese components, whose production has slowed since the massive earthquake struck Japan on March 11.

SEE OTHER TOP STORIES ON THE WDM CONTENT NETWORK

T-Mobile, Sprint merger deal means nothing without the Apple iPhone

Why Apple’s supply chain is still on top

Top 25 Supply Chains in the world

“We source hundreds, literally hundreds of items from Japan, and they range from components such as LCDs, optical drives, NAND flash and DRAM, to base materials such as resins, coatings, and foil that are part of the production process of several layers back in the supply chain,” Apple COO Tim Cook said during the company’s earnings call Wednesday.

“The earthquake and subsequent tsunami and the associated nuclear crisis caused disruption for many of these suppliers. And many unaffected suppliers have been impacted by power interruptions.

“But since the disaster, Apple employees have literally been working around the clock with our supplier partners in Japan and have been able to implement a number of contingency plans. Our preference from the beginning of this tragedy has been to remain with our long-term partners in Japan, and I have to say they have displayed an incredible resilience that I’ve personally never seen before in the aftermath of this disaster.”