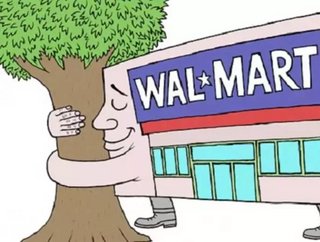 The recent publication of Wal-Mart&#39;s report on its sustainability efforts has the rare quality of being genuinely impressive. Dramatic goals and po...

The recent publication of Wal-Mart's report on its sustainability efforts has the rare quality of being genuinely impressive. Dramatic goals and powerful follow-through have made for a completely transformed company since the retail giant announced its plan in 2005.

Since 2010, they've eliminated 120,000 metric tons of emissions, saved some $231 million through recycling programs, and doubled their supply of locally sourced produce. From sea to shining sea Wal-Mart has overseen everything from solar panel installations to waste management programs that have prevented over 80% of its trash from reaching the landfill.

Led by sustainability executive Lee Scott, it's clear that Wal-Mart has made fiscally responsible as well as meaningful change to its operations - which is good news no matter how you slice it.

The inevitable 'but' comes when you examine the broader impact of Wal-Mart's effects on the environment and the culture at large - effects that cannot be easily internalized. The simple hard truth is that the pace of consumption by Wal-Mart and its customers is currently unsustainable, and won't cease to be so until renewable energy sources are in place.

Currently, Wal-Mart consumes renewable energy more than its competitors - about 20% - but that's as far as it can go without outside help.

Perhaps it's time that the government and businesses alike took note of its trend-setting industry partners and actively fostered a healthy environment for sustainability.