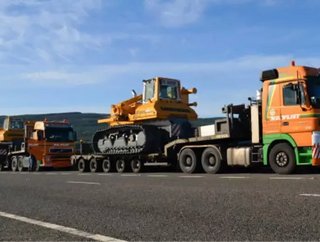 Van der Vlist was recently given a 2 stage delivery task, taking 2 Liebherr RL64 pipe-laying machines from Austria to the Netherlands, where they could be customised, before taking them all the way up to one of the northern most points of the UK.

These 2 machines, weighing 40 tonnes each and measuring 4 metres wide, needed a semi low loader each on their journey to Holland and then for the longer journey 2 weeks later. The trucks drove onto the ferry in Rotterdam, bound for Killingholme, where they began their journey in the UK.

The route to Wick, in the far north of Scotland, started off reasonably simple, however, moving in convoy towards the heart of Scotland the roads became single carriageway, where the two trucks and their escort had to be very careful at their size and weight, amongst the scenic Scottish countryside.

After the 860 kilometer journey in the UK, the machines were safely delivered to their destination, where they will be used laying pipes, as they were intended to do all the way back in Austria.