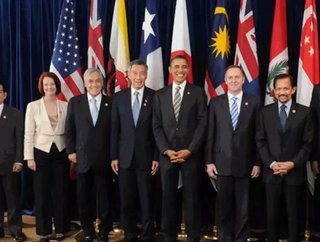 An interagency working group led by the White House Office of Information and Regulatory Affairs has goals to facilitate cooperation and coordination...

An interagency working group led by the White House Office of Information and Regulatory Affairs has goals to facilitate cooperation and coordination among international regulatory bodies, manufacturers, and suppliers. The Trans-Pacific Partnership will discuss adopting international standards and reporting requirements that can streamline regulatory checks and reduce overlapping ones.

The interagency group formed initially in 2012, but U.S. Chamber of Commerce President Thomas Donahue said he expects the pact will be completed in 2013, later than expected. The group wrapped its 13th round of negotiations July 2-10 in San Diego, California, discussing further the more than 20 chapters under negotiation, including proposals in intellectual property rights, and tariff packages on industrial goods, agriculture, and textiles.

Eight Pacific Rim nations currently have agreed to abide by the pact: the United States, Australia, Brunei, Chile, Malaysia, New Zealand, Peru, Singapore and Vietnam. According to The Washington Post, Japan, a major player in global supply chain, is a possible partner. “It’s unclear if Prime Minister Yoshihiko Noda has sufficient domestic support for the move,” according to the article, although many countries are hopeful the country will join the talks.

The development of this Trans-Pacific Partnership will influence nearly every aspect of the supply chain, from manufacturing costs to international tariffs to regulatory costs and time involvement.

Some critics have said that the trade agreement may render negative consequences if it is one that excludes countries like China and India. Jagdish Bhagwati of The Australian Financial Review says he will urge Australia to look toward China and not have “false choice.” “We cannot afford to alienate China,” he said.

The Trans-Pacific Partnership will continue its negotiations this year. Visit www.ustr.gov for more information.