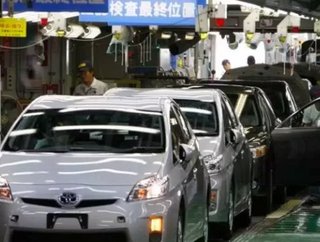 This Friday Toyota Motor reported that it expected its annual net profit to drop almost a third from the previous year, as a result of continued produc...

This Friday Toyota Motor reported that it expected its annual net profit to drop almost a third from the previous year, as a result of continued production issues caused by the tragic earthquake and tsunami that struck Japan in March. Toyota’s prediction of a 31 percent drop in net profit to ¥280 billion, or $3.5 billion, for the year ending in March 2012 was worse than expected, reports The New York Times.

But despite the doom and gloom of profit fall, Toyota’s forecast projected a robust recovery within the next few months as the automaker made headway in mending its supply chain. Even though Toyota’s 17 plants in Japan escaped the disaster relatively unharmed, factory lines have been working below capacity, as important suppliers in Japan’s worst-hit areas are still in the process of restarting operations.

Toyota also restated that there would not be a full recovery in global production until November, but there are still signs that output might be bouncing back more quickly than expected, said The New York Times. But even with a recovery Toyota may lose its title as the world’s biggest automaker.

General Motors and Volkswagen sales’ will surpass Toyota’s causing the Japanese automaker to surrender its crown after just three years. Toyota now expects to sell 7.24 million vehicles for the year through March 2012, down from 7.31 million vehicles in the previous year.

But a Toyota executive said its not global rankings that are most important. “We don’t see it as necessary to be the largest automaker in the world,” said Satoshi Ozawa, Toyota’s executive vice president, according to The New York Times.

According to Toyota executives, customer trust and safety are the most important, especially after the major spate of recalls the company experienced in 2009.