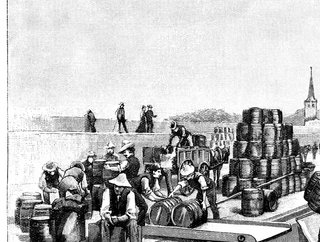 Ongoing supply problems clearly show the importance of supply chains to everyday life. Here's a quick history of how they evolved.

Prior to the first industrial revolution, supply chains were typically local and restricted to regions. As the use of railroads increased so did the distance that goods could be distributed.

Between the 1900s and 1950s, global supply chains started to take shape, organisations such as UPS opened their doors. Industry leaders began to look at improving manual processes, researching the use of mechanisation, and demonstrating the benefits of analytics in military logistics following World War II. Leading up to the 1950s the concept ‘unit load’ became popular, later to be extended to transportation management.

By the 1960s, DHL joined the growing number of logistics providers, along with FedEx in the 1970s. In this time, time-dependent freight transportation transitioned to trucks, which led to organisations coining the concept ‘physical distribution’.

With the development of personal computers, supply chains had better access to planning capabilities, including spreadsheets and map-based interfaces. By the mid-1980s supply chains were being considered an expensive, important, and complex function. Reflecting this transition, the National Council of Physical Distribution Management changed its name to the Council of Logistics Management (CLM) to represent inbound, outbound and reverse flows.

1990s-00s: The technological revolution and globalisation

The 1990s to 2000s saw the supply chain industry further grow with the invention of solutions such as ERP and advanced planning and scheduling, as well as the increase in global imports and exports; in 2006, US imports from China grew from US$45bn (1995) to over US$280bn.

While the likes of AI, data, and Internet of Things (IoT) have been around for many years prior to 2010, the last decade has seen an exponential increase in technology adoption and innovation and supply chains have not been left out. Organisations around the world have been driving their digital transformation strategies.#

The pandemic spread around the world, grinding supply chains to a halt emphasised how vital these functions are. The outbreak of COVID-19 has spurred investment in localisation and further investment in digitalisation to mitigate the pandemics impact.