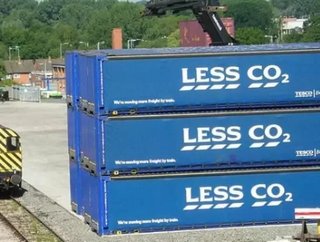 Follow @WDMEllaCopeland Tesco is shifting a portion of its freight from road to rail, in a new initiative to cut carbon emissions. The retail giant, wh...

Tesco is shifting a portion of its freight from road to rail, in a new initiative to cut carbon emissions. The retail giant, which is partnering with local businesses to deliver goods by rail, is aiming to halve emissions for each case of goods delivered by the end of the year.

Tesco plans to run its new rail freight service in Wales, six days a week. Using ‘swap-body’ containers, the goods will be delivered to rail depots by lorry and are lifted onto trains. The trains travel between Magor and Daventry, where Tesco has its main rail-connected UK distribution centre.

Each journey is estimated to take up to 40 lorries off the road, thereby reducing congestion and cutting emissions by an estimated 60 percent. HGVs typically produce 63g of CO2 for every tonne of freight transported per kilometre, which drops to just over 26g CO2 for rail freight.

Stobart Rail Freight, which manages the train used by Tesco, is also looking for other companies in South Wales to transport their own freight by rail at a reduced rate on the return trip from Tesco.

This is the latest initiative in a string of efforts by Tesco to reduce the carbon output of their supply chain. Aiming to become ‘Carbon Neutral’ by 2050, Tesco already has four dedicated rail service which is estimates save 15,000 tonnes per year of CO² equivalent per year, and also uses a barge to transport wine along the Manchester Ship Canal from Liverpool.

Tesco was named the top UK retailer for carbon reporting for the fourth year in a row by the Carbon Disclosure Project.