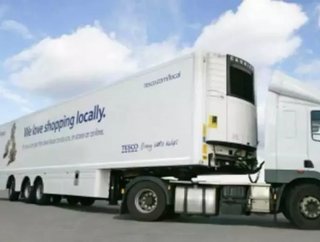 Tesco is the latest retailer to experiment with new extrended length trailers, following a Department for Transport backed trial to test their capabili...

Tesco is the latest retailer to experiment with new extrended length trailers, following a Department for Transport backed trial to test their capability to reduce CO² emissions.

The supermarket giant is now running 25 new extended Gray & Adams refrigerated trailers in an effort to reduce the number of trucks on the road and thus the level of CO² emitted.

Recent winner of the ‘Private Sector Fleet of the Year’ prize at the Green Fleet Awards, Tesco is a long-standing Gray & Adams customer and operates a substantial fleet of its temperature-controlled single- and double-deck 13.6m and short, urban trailers.

Operating from regional distribution centres in Avonmouth, Livingston and Peterborough, the new trucks are delivering to Tesco stores and can each carry 51 cages, six more than a standard 13.6m trailer.

Tesco Fleet Engineering Manager Cliff Smith said: “That represents an increase in productivity of more than 13 per cent, so the potential benefits in terms of reduced vehicle movements and lower emissions are obvious,

“But we’ve only just set these trailers on the road, so we still have a fair bit of work to do in terms of driver-training and risk assessment at the delivery points before we come to any firm conclusions.”

Britain’s biggest retailer is committed to achieving dramatic reductions in carbon emissions across its distribution operation. Its ‘F plan’ – Fuller cages, Fuller trucks, Fewer miles and Fuel economy – has seen Tesco take 111 million miles off the road over the last five years, saving 142,000 tonnes of CO2 that would otherwise have been pumped into the atmosphere.