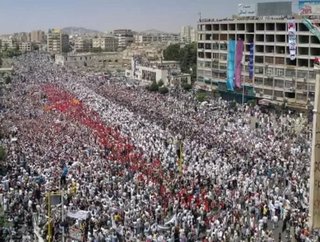 Since the start of the 2011 Syrian uprising on January 26 earlier this year, the countrys economy has been dealt a heavy blow. The port city of Tartus...

Since the start of the 2011 Syrian uprising on January 26 earlier this year, the country’s economy has been dealt a heavy blow. The port city of Tartus, once an important ocean freight shipping hub in the Eastern Mediterranean, has seen its volume slip ever since the uprising began.

“At night, ship lights made Tartus extend into a city on the sea; now it’s like a small village,” one international shipper told Reuters. “The port’s sealine was full of vessels – now the berths are nearly empty.”

“We had 25 to 30 vessels daily arriving. This has dropped to between 10 and five daily,” another major shipping agent in Tartus said.

Over six months have passed since the street protests began, as Syria’s citizens have demanded the removal of President Bashar al-Assad. In the meantime, Syria has failed to capitalize on its prime location as a Middle Eastern trading crossroads.

Shipping sources in the region told Reuters that ocean freight volume has fallen by 35 to 40 percent through the first eight months of this year.

“Importers and exporters are being very cautious, and that has led to imports of raw materials falling sharply as production slows down in many industries due to the troubles,” one Syrian transportation official told Reuters.

Trade has dropped considerably between Syria and its Arab trading partners, who are growing concerned over the number of logistical challenges within the troubled nation.

According to Reuters, analysts had predicted that Syria’s GDP would grow by 3 percent this year. Thanks largely to the supply chain and logistics problems posed by the unrest in the port cities, GDP is expected to fall by several percentage points in 2011.