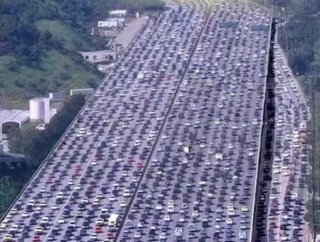 It looks like Los Angeles motorists arent the only drivers with a legitimate traffic gripe, as congested roads in Sydney are likely to get worse in the...

It looks like Los Angeles motorists aren’t the only drivers with a legitimate traffic gripe, as congested roads in Sydney are likely to get worse in the near future thanks to an increase in freight forwarding.

Sydney (and Australia’s eastern seaboard as a whole) has a traffic problem thanks to some of the usual factors, including an inadequate public transportation network and road works projects. That situation will only get worse once freight starts moving through Port Botany, Sydney’s third container terminal.

According to Sydney Ports, freight forwarding (or trucking) traffic is expected to increase by 70 percent over the next 10 years.

What’s interesting about the rise in freight forwarding numbers is the current drop in intermodal rail. The number of containers that left Port Botany by rail dipped 20 percent in the 18 months leading up to June earlier this year.

According to Sydney Ports, that ratio between rail freight and freight forwarding has shifted 14 percent thanks to the rise in trucking and the fall in intermodal rail.

Sources at the Australian Rail Track Corporation disputed those numbers in an interview with the Sydney Morning Herald.

“If you said it was a bit less than 10 percent, you wouldn’t be wrong,” one source told the paper.

It doesn’t matter who’s right in this situation. The bigger problem has been the failure of the Australian government for setting unrealistic freight rail goals for Port Botany.

After setting a goal of shipping 40 percent of all Port Botany cargo by rail, the Australian government has dropped its target to 28 percent

“'Forty per cent was unrealistic and unachievable and typified Labor's propensity to pluck figures out of the air,” the Transport Minister, Gladys Berejiklian, told the Sydney Morning Herald.

The increased number of trucks on the road is already causing considerable delays for motorists. Last Friday, one semi-trailer jack-knifed across one highway, according to the Herald, causing a traffic jam roughly 5 miles long.

This is a problem that goes beyond Australia, however. Motorists all over the world should take heed of an increase in freight forwarding, and push for government to make it easier for companies to ship via freight rail. It’s cleaner, safer and often times, cheaper.