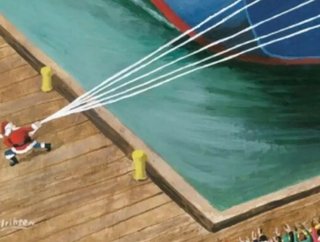 The ongoing global disruption of supply chains has made the front cover of one of the world’s most esteemed magazines - The New Yorker.

Famed illustrator Mark Ulriksen not only produced the cover, but he also penned an article that walks readers through a year of supply chain woes.

“This year,” Ulriksen writes, “many of us have become all too familiar with supply-chain issues. This ubiquitous, yet oddly mysterious, phenomenon has been blamed for shortages in everything from chicken wings and bucatini to couches and rental cars.”

Supply chain problems loom over Christmas 'like a Grinch'

He adds that now, supply chain problems “looms over the Christmas holidays like a Grinch dreamed up in a big-box warehouse”.

He goes on to ask readers: “Have you experienced the disruptions in the supply chain first hand? I have. A refrigerator we ordered took eight months to arrive. A friend’s took six months. Another friend will have to wait until next summer for his new camper van.”

“Even dogs,” he quips, “come with a one- or two-year waiting list.”

Ulriksen goes on to reminisce about his hometown, San Francisco, once one of the United States’ major container ports.

He reveals how his grandfather had been a ferry operator, and that his uncles had been stevedores, but that their jobs - and thousands of others - were lost when the city’s container traffic began using the Port of Oakland instead.

Now, he says, the waterfront is alive with shops and restaurants. “What’s not to like?” he asks.

Ulriksen’s work is instantly recognizable to most Americans, and has featured in most of the country’s leading magazines and newspapers, including The NY Times, Washington Post, Wall Street Journal, Time, Rolling Stone, Playboy and Readers Digest.

But it is for his New Yorker covers that he is best known. He has been contributing since 1993, and thus far has 65 to his credit.