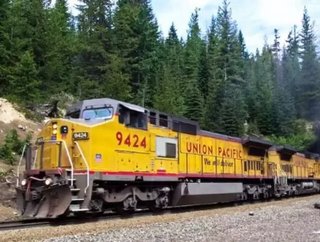 Want some numbers to back up the renewed interest in freight rail growth? Look no further. Union Pacific Corporation, one of the worlds most prestigiou...

Want some numbers to back up the renewed interest in freight rail growth?

Union Pacific CEO Jim Young is rightfully pleased with his company’s progress in 2011.

“The dedicated efforts of our employees, combined with the strength of our diverse railroad franchise, drove record fourth quarter results,” Young said. “In 2011, we achieved best-ever marks in customer satisfaction and employee safety, invested a record $3.2 billion in capital, and generated record free cash flow of $1.9 billion. 2011 was the most profitable year in Union Pacific's history, allowing us to reward shareholders with increased financial returns.”

In related news, the Customer Satisfaction Index of 92 tied a quarterly best and was two points better than the fourth quarter 2010.

Quarterly train speed, as reported to the Association of American Railroads, was 25.6 mph, decreasing 3 percent compared to the fourth quarter 2010.

It was 150 years ago that Abraham Lincoln signed the Pacific Railway Act on July 1, 1862, creating the original Union Pacific. One of America's iconic companies, today, Union Pacific Railroad is the principal operating company of Union Pacific Corporation linking 23 states in the western two-thirds of the country by rail and providing freight solutions and logistics expertise to the global supply chain.

From 2000 through 2011, Union Pacific spent more than $31 billion on its network and operations, making needed investments in America's infrastructure and enhancing its ability to provide safe, reliable, fuel-efficient and environmentally responsible freight transportation.