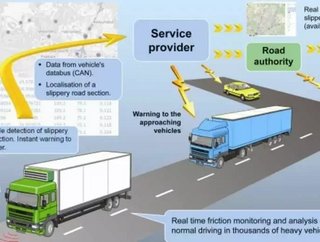 Follow @Ella_Copeland A new system has been developed which can warn drivers of slippery roads in advance, providing drivers with a database to give ve...

A new system has been developed which can warn drivers of slippery roads in advance, providing drivers with a database to give vehicles in the area immediate warning of slippery conditions nearby.

Developed by the VTT Technical Research Centre of Finland, the automatic system makes use of an entirely new real-time method of obtaining information on a road’s actual slipperiness.

Based on a method developed by VTT, the slipperiness detector monitors changes in road conditions in real time, based on data collected by the car's own sensors.

“The method entails estimating the difference in the speeds of the drive shaft and freely rotating axles in various driving situations, which enables deduction of the level of friction”, says Senior Scientist Kimmo Erkkilä.

Thanks to the new system, it is possible to obtain direct information on road conditions, which allows much more accurate road warnings to vehicles via, for example, SMS messages, where previous technology relied on estimates derived from sources such as weather forecasts.


The system is capable of determining the slipperiness of a road on the basis of a drive of a few kilometres. The information is then passed on to the driver, before he or she has even noticed the change in road conditions. After this, observations collected from all cars and the related coordinates are transmitted wirelessly to a background system, which maintains a real-time slipperiness map and generates a log of the road conditions. For each car that joins the system, the background system produces and transmits an individual data package on road conditions, allowing drivers to prepare in advance for slippery stretches of road.

According to VTT, widespread implementation of the system would create significant savings for transport operators, other road users and society at large

Information on the level of slipperiness can be transmitted to drivers by means of warning lights, voice signals, text or symbols, according to the possibilities offered by the terminal device. As well as through vehicle terminal devices, this information can be utilised via many other communication channels, such as smart phones, the national media, weather forecasts or roadside signs.

Various vehicle terminal devices can be used to join the system, as long as they have sufficient capacity to carry out the slipperiness detection calculations, have a link to the vehicle's data bus, are equipped with a location tracking system and are able to connect to the background system.

Developed by VTT, this system fits all cars, irrespective of their make. At present, the system has been used in heavy lorries, but is also directly compatible with other heavy vehicles. Using the current method, passenger cars can also make use of the slipperiness data produced by the system. In the future, the system can be expanded to make use of observations collected from passenger cars. More information can be found at: http://www.transeco.fi/en/transeco