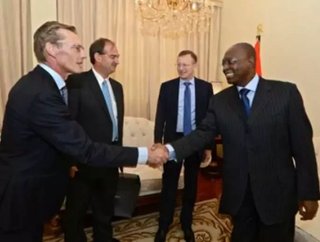 The CEO of Maersk Group has completed a tour of Nigeria, Angola and Ghana last week, in a bid to focus on African infrastructure improvements. As Afric...

The CEO of Maersk Group has completed a tour of Nigeria, Angola and Ghana last week, in a bid to focus on African infrastructure improvements.

As African economies boom, infrastructure improvements become more important to turning the growth into sustainable development and Maersk is planning to take a role in this transition.

Group CEO Nils S. Andersen set a range of talking points as he met with political leaders, customers and Maersk business heads in the three countries, focusing on specific issues such as the looming overcapacity of the Port of Tema, a critical artery for trade in Ghana, which will reach structural overcapacity in the next two years.

Ghana, Nigeria and Angola are rich with natural resources, yet are looking to build up other vital sectors of their economies like agriculture and manufacturing.

"Maersk has a long history and growing presence across shipping and energy on the African continent and certainly in all three of these countries," says Andersen.

"The Group has a tremendous opportunity to prove that our values, expertise and breadth of services make us an ideal partner for achieving the sustainable growth these countries are pursuing."

Investing for the long-term

In Nigeria, Andersen met with President Goodluck Jonathan and his most senior ministers in addition to presiding over the official groundbreaking for the expansion of Apapa terminal in Lagos, West Africa's largest container terminal. The expansion will ensure sufficient capacity for the port until 2017.

"We are aggressively expanding other sectors of the economy, to reduce dependence on oil and increase exports," President Jonathan said at the meeting, adding that he hopes the expansion of the terminal will help the port improve its efficiency and enable it to clear all goods from the port within 48 hours of arrival, compared to today's seven day average.

Andersen met with Vice President Manuel Vicente in Angola,  where Maersk currently have eight active business units, including the four largest (Line, Terminals, Oil and Drilling). Angola is an important country for Maersk, with growth planned for the APM Terminals and for Maersk Oil, which is heading for first production in the Chissonga oil field before the end of 2018.