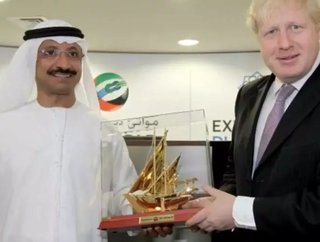 Boris Johnson, the Mayor of London, is looking to Dubais Jebel Airport as the solution to the UKs aviation capacity dilemma, according to reports by a...

Boris Johnson, the Mayor of London, is looking to Dubai’s Jebel Airport as the solution to the UK’s aviation capacity dilemma, according to reports by arabiansupplychain.com.

During a visit to the Jebel Ali Port hosed by Sultan Ahmed Bin Sulayem, Chairman at DP World, the mayor toured visited DP World’s flagship facility to gain insight into how the company’s massive London Gateway port and logistics park project is modelled on facilities in Dubai.

According to reports by arabiansupplychain.com, Johnson found inspiration in the Dubai facilities to solve capacity problems in London: "If you look at London's aviation capacity problems, I think you can see a very, very clear opportunity for us to find a synergy between the astonishing new [DP World parent company] Dubai World port in East London and the capacity of aviation as well," Johnson said in Dubai on Tuesday.

"If you look at what Dubai World is doing here in Dubai, it's the fusion of the maritime transport and the aviation capacity that really offers the potential for long-term competitiveness and growth.

"That is something we want to explore.”

During their meeting and a tour of the port, Mr Johnson was briefed on the technology-driven operational efficiencies that have placed Jebel Ali among the top ten container ports globally, and the world class infrastructure that DP World is putting in place at London Gateway, which is on target to open for business in the fourth quarter of 2013.

H.E. Sultan Ahmed Bin Sulayem, Chairman, DP World, said: “We are delighted to have the opportunity to show the Mayor of London our flagship facility. Jebel Ali port together with the free zone have both supported and driven the growth of Dubai and the UAE over the past four decades. We have modelled DP World London Gateway on Jebel Ali, knowing that a modern deep water port and logistics park close to the important London and South East market will bring direct benefits to the UK economy.”

He added: “Strong historic ties bind the UAE and the United Kingdom, and we believe the London Gateway project will further cement our excellent relations.”