Logistics turning to rail freight in race to net zero 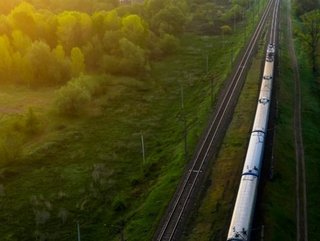 Some countries are doing better than others on making rail a major part of their intermodal logistics infrastructure, with the US leading the way.
When it comes to freight, rail is far greener than road, yet it’s far more complex, and a change in mindset is needed if it's to make a difference

European Union (EU) sustainability proposals include a plan to double rail freight across the territory by 2030, with the US also committed to increasing the role of rail as part of its transport infrastructure.

On a per-tonne-delivered basis, it’s estimated rail freight produces 75% less greenhouse gas emissions (GHG) than shipping by truck, so it is easy to see why politicians and business chiefs are keen to embrace rail more fully as part of the intermodal logistics landscape (with ‘intermodal’ defined as being two or more modes of transport being used to convey goods).

Some countries are doing better than others on making rail a major part of their intermodal logistics infrastructure, with the US leading the way. Unlike the EU, the US is a single landmass and has a single language, and around 40% of all US freight by tonne-mile is moved by rail – compared to around 15% in Europe.

Also, the States has a more-advanced logistics infrastructure than the EU, plus it boasts a large ecosystem of Intermodal Marketing Companies (IMCs) that make it almost as easy to book intermodal transport in the US as it is to book a truck.

The EU’s bid to catch up with the US on the intermodal front will be dependent as much on port development as that of rail, according to a recent report from McKinsey.

The report – Bold Moves to Boost European Rail Freight – highlights how, in the past 70 years, European rail freight’s share of supply chain movements has plummeted from 60% in the 1950s to just 15% today.

The report outlines how several major European import and export port hubs have very low rail modal share. In Felixstowe in the UK, it’s 17%, just 8% in Antwerp, Belgium, and 7% in Valencia, Spain.

McKinsey called on European ports to “strategise hinterland activity”, urging them to follow the example of the Port of Hamburg, where redevelopment has enabled it to increase its rail modal share from 30% to 51% in less than three decades.

“The targeted investment in infrastructure at the Port of Hamburg supply chains triggered a massive shift,” McKinsey writes, adding: “Ports play a major role in the transport of European goods, handling around 50% of imports and exports. Rail access to ports is therefore a crucial factor in fulfilling Europe’s aspiration for freight rail.”

It says, if the EU is to achieve its goals on rail, it will require “a massive shift in trajectory” – including a switch to new major long-distance freight flows, more key connection points, such as ports, and new industries able to replace volumes lost in declining sectors.

Another challenge, McKinsey points out, is that, although rail transport is better for the environment, trucking is a supply chain favourite because it’s cheaper, more flexible, and has greater reach than rail.

Planning biggest barrier in shift from road to rail

“The biggest barrier to shifting the emphasis from road to rail freight is planning,” says Ken Sherman, President of US-based IntelliTrans, whose SaaS-based solutions help businesses manage complex supply chain needs. “Planning road transport is easy compared to other modes. You can potentially have numerous hauliers, brokers, and third-party logistics providers (3PLs) to choose from for your shipment.”

Sherman adds: “You can also often book transport with a single phone call or email, and road haulage typically has the shortest transit time from origin to destination of all modal options.”

He also says there is the fact that some points of origin or destination might not be served by rail – particularly in Europe.

That said, Sherman sees rail playing an ever-growing role in logistics globally over the coming decade.

“I expect rail use to continue to increase. I think most people recognise the need to reduce our overall carbon footprint, and that transportation drives a significant portion of GHG emissions.”

The overwhelming importance to companies of cutting emissions in their supply chains will, Sherman feels, far outweigh the more challenging nature of rail freight planning compared to road. He also says that the businesses will also accept that, to stay on top of such planning, they will need to invest in tech solutions that give end-to-end intermodal supply chain visibility.

Companies can best achieve such visibility by partnering with a data aggregator or visibility technology provider, according to Sherman.

He adds: “Such companies will have pre-existing connections to many of the logistics services providers (LSPs) that are used for journeys, meaning they’ll have well-established processes for onboarding carriers that they are not connected to already.

“The shipper will need authorisation to provide services to the technology provider and will also need to strongly encourage some of the carriers to engage in the process.”

The benefits of such visibility across an intermodal supply chain are considerable, says Sherman: “It will improve customer service, by leveraging a technology provider who can provide updates and notifications to customers, who might be concerned about longer, and potentially more variable, transit times.”

Sherman says there are also cost reductions to be had.

“Oftentimes, the cost of transport goes down with GHG emissions, so you can achieve both cost savings and emissions’ reduction by being able to effectively use these modes,” he says.

“Then there is asset utilisation. By having better visibility and the ability to take action on exceptions before they become more significant problems, you can keep asset velocity up and the number of assets required to serve your business down.”

Sherman believes that another appeal of rail is that it can already offer what autonomous trucking is promising to.

“In the US, it’s said autonomous trucking will take off only once each truck is hauling two trailers and there are dedicated lanes on the highways to improve flow and safety. Also, it will only be on the first and last mile that driving is done by a human driver.

“Well, that sounds a lot like a small intermodal train to me, so why don’t we leverage something that already exists today, as opposed to waiting five or ten years for autonomous trucking to have a significant impact?”