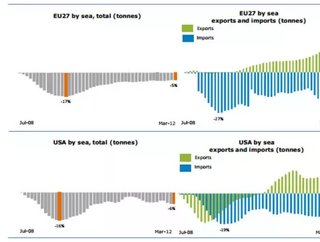 Additionally, the report shows that Brazil, Russia, India, Indonesia, China, South Africa (BRIICS), and Asia have experienced global growth, although they are expected to “level off.” Weak continued domestic demand has hindered global recovery in both air and sea trade and transport, with the EU-27 (-5 percent) and United States (-6 percent) still at pre-crisis levels for sea transport. However, total trade by sea is at 12 percent above the pre-crisis level, due in part to new highs in export levels to BRIICS from the EU-27 (52 percent) and the United States (59 percent).

Air freight has remained in pre-crisis levels among the EU-27 (-4 percent), while the United States is slowly recovering at 1 percent. Trade by air from the EU-27 to BRIICS and Asia has also remained flat. In all transportation forums, trade to BRIICS and Asia have remained an important baseline that sustains the industry even while in a decline.

Germany stands alone in its growth during the otherwise stagnant trend in transportation and trade. Trade by sea grew throughout the economic crisis to 12 percent before pre-crisis level, and air cargo data shows a slow increase as well.

For more data on transportation and trade statistics from the International Transport Forum, look to their quarterly transport statistics.