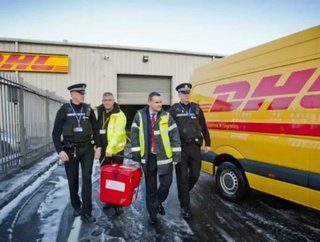 The whisky, which is almost 120 years old, was left behind in Antarctica by the British Explorer Ernest Shackleton after a failed expedition in 1909. Excavated in 2010, three cases were found by conservators working for the Antarctic Heritage Trust of New Zealand, where one crate was flown to New Zealand and carefully thawed, and three bottles of the historic whisky were flown to Scotland to be analysed by Whyte and Mackay, who now own the Mackinlay brand.

“We spent weeks planning this operation, investigating various different travels options and routes to get it from Scotland to New Zealand. Having been buried in the Antarctic ice for more than 100 years, the whisky is extremely precious and delicate, which gave us the opportunity to show our expertise in shipping valuable and delicate cargo”, said Alan Davis, Regional Director, Air Freight Scotland, DHL Global Forwarding.

The whisky had to be specially packed for the entire journey. It then travelled in a secure container via Dubai on to Christchurch, New Zealand, where DHL transported the whisky back to a secure facility in Christchurch before its return to Antarctica.

“We chose DHL for this shipment because we’ve had excellent service from them to date and we trust them with our high value shipments. This is a unique project, a once-in-a-lifetime opportunity, so it’s important we got it right,” said Hazel Clark, Customer Operations International Team Leader, Whyte & Mackay.

Explorer Ernest Shackleton had taken several cases of the whisky on his expedition to Antarctica in 1907, then left them behind when his expedition failed to reach the South Pole.