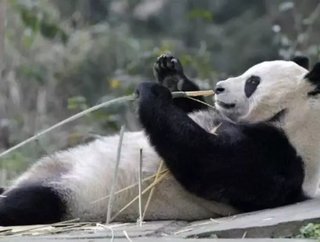 Managed by the Royal Zoological Society of Scotland (RZSS) and the China Wildlife Conservation Association (CWCA) in China, the specially chartered Boeing 777F flight known as the “FedEx Panda Express” landed in Scotland yesterday, and marks the first time in more than 17 years that giant pandas will reside in the UK.

The non-stop flight was chartered especially for the VIPs—Very Important Pandas—and the pair travelled in custom-built enclosures provided by FedEx Express. The in-flight meals of bamboo, apples, carrots, a special panda cake and mineral water were served to the pandas, who spent the journey eating snacks and snoozing. Tian Tian and Yang Guang were accompanied by a veterinarian and two animal handlers from Edinburgh Zoo and the Bifengxia Panda Base to look after their needs throughout the journey.

FedEx Express donated its logistical services for the transportation, providing an expert team to ensure the rare animals’ safety. During the flight, the pandas were in the safe hands of seasoned pilots Captain Paul Cassel, Captain Bob Gasko, Captain Jim Gorman and Captain Bill McDonald, who all have extensive experience in transporting some of the world’s most precious cargo, ranging from white rhinos to penguins.

The pandas continued their journey in a specially-decaled FedEx Express vehicle to deliver them to their new home at Edinburgh Zoo. The Lothian and Borders Police Force were also on hand to ensure a smooth ride. Upon arrival, the pandas will reside together in Edinburgh Zoo’s specially-built giant panda enclosure.

Other unusual international cargo transported by FedEx Express includes a windmill from Denmark, the Ryder Cup and a vintage Jaguar Le Mans car worth over £1 million.