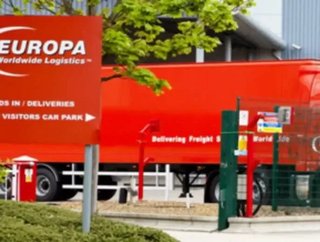 Independent transport and logistics company Europa Worldwide Group has been sold to Andrew Baxter, the former owner of RH Freight Group, which was sold to Kuehne + Nagel in 2011.

London-based Europa will continue to trade under the same name and no job cuts are planned as part of the sale, the sum of which has not been disclosed.

Europa employs 500 staff across nine branches in the UK and Ireland and has a turnover of £72.4 million. It opened a 155,000 sq ft logistics centre at ProLogis Park, Midpoint, Birmingham two years ago and delivers an estimated 500,000 consignments around Europe and Scandinavian countries every year.

Baxter, who has taken a 90 percent stake of the firm and will take up the role of Managing Director, said: “I have spent some time looking for the right opportunity and am very excited about the potential here at Europa.

“The company has an excellent reputation and a good track record and I want to build the business to become the clearly recognised, number one groupage operator in the UK.

“I also believe the company has great potential outside of its European operations, in air, ocean and logistics, and we will be looking at what we can do to further develop these businesses.

“It will be business as usual for the next few months whilst we take time to evaluate the current set up.

“We already have plans to invest £1.5 million in new IT infrastructure to help improve efficiencies and communication.

“There is a strong branch network which could be boosted further with other new sites to give a denser coverage of the UK.”