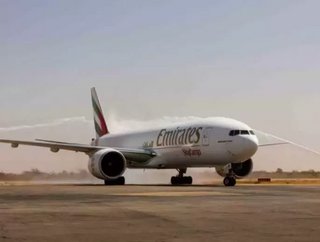 Follow @SamJermy and @SupplyChainD on Twitter.Emirates SkyCargo, the freight division of Emirates, has bolstered its operations on its African trade rou...

Emirates SkyCargo, the freight division of Emirates, has bolstered its operations on its African trade route network with the introduction of a weekly freighter service to Ouagadougou in Burkina Faso.

Ouagadougou is the 27th African destination to join the Emirates SkyCargo network, further enhancing bilateral trade links already in place between the UAE and Africa.

Nabil Sultan, Emirates Divisional Senior Vice President of Cargo, said: “The addition of a dedicated freighter service is a major milestone in Emirates SkyCargo’s growth in Africa, creating more opportunities for importers and exporters across local markets and onto our worldwide network.”

Emirates SkyCargo operates a Boeing 777 freighter aircraft on the Dubai-Ouagadougou-Dakar-Frankfurt-Dubai route, which is capable of carrying over 100 tons of cargo each direction. The Boeing 777F aircraft is one of the most modern, technologically advanced freighters available and has the lowest fuel burn of any comparable sized aircraft.

Via its advanced cargo handling and storage facilities at its hub in Dubai, Emirates SkyCargo anticipates transporting goods into Burkina Faso such as pharmaceuticals and electronics from cities as far as Mumbai and Guangzhou, and bringing local products and commodities such as mangoes and fresh beans from Burkina Faso to cities like Frankfurt and Dubai.

“We offer thousands of tonnes of capacity each week on our routes into Africa and the new scheduled freight service to Ouagadougou will take Emirates SkyCargo’s import capacity to Africa to 3,700 tonnes per week. Our services help facilitate international trade for businesses in the region, as well as global customers doing business in Africa and we remain committed to our African network.” added Nabil Sultan.

Emirates has been playing a role in the African economy since the launch of its first African point in Cairo in 1986; just a year after the airline was established. Emirates SkyCargo has become a valued partner for many local businesses across the continent, carrying goods from 26 African points to Emirates global network of more than 140 destinations across six continents via the Dubai hub.

Emirates SkyCargo, which operates from its hub in Dubai, provides cargo services to 127 passenger destinations around the world using cargo hold capacity in Emirates’ passenger fleet of 217 aircraft. It also operates a fleet of 14 freighters, 12 Boeing 777 Fs and two Boeing 747-400 ERFs, which operate to over 50 scheduled freighter services from its new cargo terminal at Dubai World Central’s Al Maktoum International Airport.